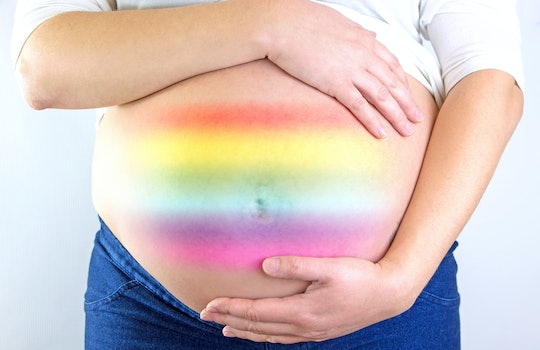 Losing your baby is a devastation unlike any other. Some of us do, however, find some comfort when we're fortunate enough to give birth to a rainbow baby. For those unfamiliar, a rainbow is the baby you have after a loss, just like the rainbow after a storm. Sometimes a rainbow comes to your life just a few months after your loss (like mine), while others spend years trying for another baby. So I asked few other moms what it was like when they found out they were having a rainbow baby, and they all had so much to say.

I remember the exact moment I found out I was pregnant with my rainbow baby: my son. My husband and I had just moved into a new apartment, but we were both stressed out thanks to our jobs. I was just barely crawling out of the depths of my grief after I lost my daughter to premature birth. I knew I wasn’t in any way, shape, or form ready to try again for another child. In fact, my partner and I weren't trying at all. We were being careful but, with life, things just happen. I’d been feeling off for a few days when I realized my period was about a week late.

I rushed to a Walgreens straight after work and took an at-home pregnancy test right there, in the store's bathroom. I saw that positive result and felt the world spinning out from under me. I was terrified, to be sure, but I was also excited and even a little hopeful. It was quite the experience, but by the end of it I finally had a baby to hold. My baby. Now that baby is 3 years old, and I couldn't be happier or more thankful for his presence in my life. I'm also not alone, as the following moms can tell you. There's just something truly magical about those precious rainbow babies.

More Like This
A C-Section Actually Doesn't Take As Long As You Think, According To Experts
Advice For Rihanna On Having A Baby In This Country, From One Black Mom To Another
Who's Getting Abortions? Mothers. 59% Of Abortion Patients Already Have A Child.
These Stepmother's Day Instagram Captions Are Straight From The Heart