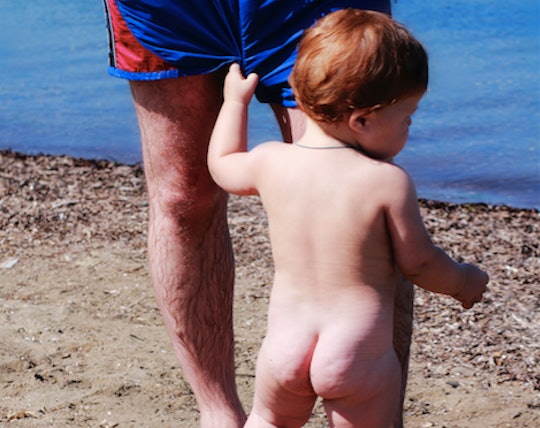 I Have Naked Photos Of My Daughter & Everyone Calm Down

Dear Pearl-Clutchers: You're doing it again. You're involving me in matters I really don't care about but now have to defend because of your moralistic caterwauling. In this case, former Teen Mom Farrah Abraham's naked photos of her daughter. I don't care about this show or the cast. I haven't watched since the women were girls and their children were babies. But when someone brought this "scandal" to my attention, I was so legitimately confused by the fact that so many people even consider it scandalous at all that I had to say something.

In a brief interview with TMZ, Abraham was asked about the fact that Kim Kardashian was recently photographed topless by her toddler daughter, North. "Do you think that's right?" the TMZ reporter pressed. Abraham sort of brushed it aside as a non-issue, as well she should, people! Good grief! What world is this where a Teen Mom cast member is like, "Hey, maybe you need to tone down the drama there, friend."

To illustrate what a nothingburger of a story this Kardashian business is, Abraham said:

"My daughter and I ... run around the house naked and live life free. ... We have naked pictures on our phones of each other because we're a mother-daughter crew. My mother has pictures of me running all over the yard naked."

Watching the video of this interview, I saw absolutely nothing wrong with it. The only thing I was mildly surprised by was "Oh wow, do 9-year-old kids have cell phones these days? Jeez, I'm old." Because you know who else is carefree about nudity in their house and has a million naked pictures of her kids on her phone? Me. Casual nudity is just that: casual. A body is a body and seeing one in its natural state is not a huge deal in my home. I personally don't lounge around naked (personal choice), but my kids regularly see me naked because I don't take great efforts to hide my nudity from them, and they just don't seem to get the concept of knocking on doors. My son mostly wears clothes these days (his personal choice) but will occasionally strip down because he says he "feels like being naked for a while." My daughter? That girl is only clothed when I make her put on clothes. Without naked pictures of her there would be, like, four pictures of her. Because she's always naked.

Apparently, some easily-scandalized members of the public are not as chill with nipples as Abraham and I are.

This, I assumed, is why Abraham and her daughter have nude photos of one another. It's why I have them. Without naming names, I'll add that a lot of other parents I know are in the same boat, too.

Apparently, some easily-scandalized members of the public are not as chill with nipples as Abraham and I are. (Of course it didn't help that TMZ posed this as the mother and daughter "sharing nudes," which is absolutely not what Abraham said. She said they "have naked pictures on our phones of each other" which, if you're casual about nudity around the house, is going to happen.) People get super miffed. Some went classic pearl-clutching. Some (ironically using the handle "kpeacelove") got violent. Some, weirdly but not surprisingly, dogwhistled some pretty stereotypical MRA rhetoric. Some (many) called for the removal of the child from the home.

A lot of the to do comes from, I think, a generalized view of nudity and sexuality, as exemplified by this humdinger of a response:

Our society has this weird ideas that nudity (especially female nudity) is exclusively for sexual gratification of one kind or another. Therefore, "good girls" (that is to say, women and girls who conform to our ideals) privatize their sexuality completely and dress "modestly" by not showing too much skin. There's also this pervasive idea that once you're a mom you're no longer sexual and, moreover, you're no longer allowed to be sexual. Therefore, since nudity is seen as sexual (regardless of context), mothers certainly shouldn't be naked.

Yeah, I usually have sex naked. You know what else I do naked? Shower. Sleep.

This is of course absurd. Yeah, I usually have sex naked. You know what else I do naked? Shower. Sleep. Read a book in my back yard because I'm a hippie and it's a nice day and I feel like "airing everything out" a bit. None of that is sexual. Know what else I can do naked? Literally anything... except maybe winter sports, because brrr. For you see, under these clothes I'm always naked. Anything my body is capable of doing it can do, and it doesn't need clothes to do it. So this idea that nudity must have some sort of undertone to it is just absurd.

Plus, I didn't hand in my "sexy lady" card when they handed me my kids' birth certificates.

Our misogynistic society is perfectly willing to make money off of sexualizing women's bodies. I don't know that you could ever effectively calculate it, since so many industries rely on women's bodies either directly or indirectly via advertising. But if a woman overtly appears to participate in or benefit from such an endeavor she's a pariah. She's not keeping in line with what a woman is "supposed to be," and if there's one thing a misogynistic society hates it's women who don't acknowledge their place. Some people who are OK with women being overtly sexual nevertheless get all flustered and offended when those women try to express something other than sexuality via nudity. It's like "OK, porn star: you're only ever allowed to be porn-y. Therefore your naked body is always sexualized and if you're naked in front of your kid you're a pervert."

There is plenty to be upset about and worry about regarding children these days. A mom having casually naked pictures of her child is not one of them. Here's what I want you all to do. Step back, sit down, take a breath, and calm the hell down.

After all, I have naked pictures of my daughter, too.