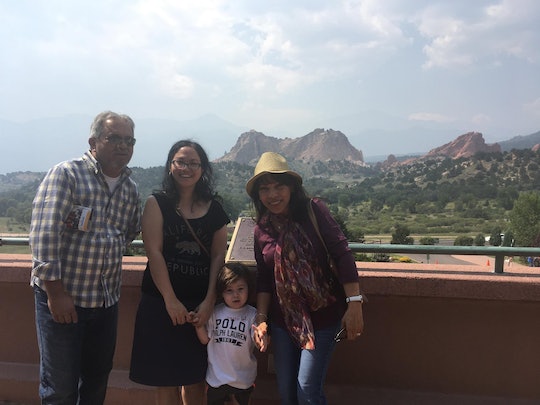 I Never Fully Appreciated My Immigrant Parents — Until Now

Being an immigrant in America has never been easy. Xenophobia and racism have reigned supreme since Europeans first arrived and deemed indigenous peoples "savages." Over the next few centuries, various populations have endured the brunt of this hatred. African Americans were brought over as slaves. Chinese, Germans, Japanese, Irish, and Italian immigrants arrived and face systemic prejudice. And today, many of the same populations who were once oppressed have now become the oppressors. Muslim, middle eastern, and Latinx immigrants are now facing unfathomable and systemic bigotry. That's why I know I’ll never be able to thank my own immigrant parents enough for the sacrifices they made in coming to the States in search of a better life.

I was born in Miami, FL, a city composed mostly of immigrants. Despite my lifelong complaints about my hometown being too hot, too humid, and too buggy, there is so much about this undeniably magical city that I love. One of those things, of course, is how diverse it is. Miami is such an immigrant enclave, in fact, that I never really felt like much of an outsider. We were all from “somewhere else,” or at the very least our parents or grandparents were, so it wasn't odd to have originated from somewhere other than the continental United States. My parents and I, for lack of a better term, simply fit in.

It wasn’t until I got older that I began to realize how we were seen by a plethora of other people in this country. And it wasn’t until the past few years that I realized just how much hatred some folks harbor for people like my parents. They call us lazy, then they blame us for stealing their jobs. They say we’re dangerous, but then they take over our neighborhoods. They tell us to go back to our countries, yet we were either born here or have adopted this place as our own, building it up to be the Land of the Free and the Home of the Brave. But while this did not become apparent to me until much later in life, I know my parents have known this reality for quite some time.

They tell us to go back to our countries, yet we were either born here or have adopted this place as our own, building it up to be the Land of the Free and the Home of the Brave.

My father arrived in the country in the early 1980s. He and my mother had gotten married in Nicaragua during the Sandinista Revolution, but he was forced to leave when his own life was in danger for refusing to continue to take part in the war. As my mother was pregnant with my older brother, my dad had to leave her behind with the promise to send for her. He came here without knowing when he would see her again, or if he would ever meet his son. While he did not speak English, he found what work he could in construction, making the best of every opportunity available to him.

My parents spent over three years apart to build a better life for themselves and their son. Eventually, my dad was able to save enough to help get my mother and brother travel to the United States. He doesn't discuss the years they spent apart these days, but I can’t imagine it was easy for him. Miami in the 1980s was not the Latino hub it is today. People like my father were just getting started, establishing their lives and businesses in a place that let them know, with reckless abandon, that they weren't welcome. They heard the slurs thrown their way, and there were few protections for marginalized people. And, of course, there were people that made my father and other minorities aware of their “place” in the United States; a place for "the other."

She was a young mother doing everything she could to raise two kids in a foreign country where people didn’t always take kindly to people like her.

Still, my father learned the language as best he could. He worked hard and slowly rose through the ranks, learning all he could in his new profession. Eventually he took on supervising roles, and earned the respect of his employers and co-workers. Meanwhile, my mother gave birth to me and raised my brother and I the best she could, away from the only friends and family she'd ever known. This was decades ago, before we had smartphones and Facebook, or Skype and FaceTime and Snapchat. There wasn’t even a phone at my abuelitos’ (grandparents’) house in Nicaragua that my mother could call to check in on her parents, or to let them know she was OK and ask them for parenting advice. She could only rely on letters sent in the mail to give and receive news of her family. She was a young mother doing everything she could to raise two kids in a foreign country where people didn’t always take kindly to people like her.

In other words, she was braver than I’ll probably ever have to be.

My parents left their homeland because things were difficult and dangerous, sure. But they also left their home country and happily stayed in America because they knew my brother and I would have many more opportunities than we ever would have been provided in the tiny town of Corinto. They stayed and worked hard to give us, their children, a better future. They wanted us to have a home we could rely on, so they saved and scraped everything they could to finally buy a house. They wanted us to graduate high school, and so they supported us every step of the way and throughout our educational careers until we did. They wanted us to go to college, and while they lacked the ability to create college funds for us, they always inspired us and pushed us to learn until we finally got our diplomas. They wanted us to have careers someday, to do something that would sustain us and maybe make a difference in the world, and to never feel limited. And, because of their hard work and constant sacrifice, we are.

My parents came from so very little. I’ve seen the home my mother grew up in, and the impoverished town where she and my father met and fell in love. I know that their electricity often went out and their water mains would cut out for hours or days at a time. I grew up modestly, often sharing a single room with my whole family, but now my son has his own room. We had no family vacations growing up, but I’ve had the chance to drive my son across the country and stay in fancy hotel rooms with him. I take him to races and theater performances, outdoor concerts and movies galore. I wore my cousin’s hand-me-downs for the majority of my childhood, but my parents now send over designer brand outfits for my son — not because they’re show offs or snobs, but because they are so proud of what they are able to give him; to see the fruits of their labor presented to their only grandson. Even when they struggle, because they still sometimes do, they do what they can to give their children and grandchildren every luxury they never dreamed of while growing up in Central America.

How could any child of immigrants thank their parents enough for the sacrifices they made? When I think of the people who, today, feel emboldened to tell Black and Brown people to “go back where they came from,” or this current administration passing legislation that separates immigrant families, all I can think of is, “That could have been us." And it could have been. It could have been us.

When I think of the people who, today, feel emboldened to tell Black and Brown people to “go back where they came from,” or this current administration passing legislation that separates immigrant families, all I can think of is, “That could have been us."

My parents continue to stay in this country because this is where their grandchildren live, and they don’t want to be too far away. They continue to sacrifice and continue to give their growing families everything they can, and despite living in a place that could prove to be even more dangerous for them should the palpable hatred of immigrant families continues to grow. And make no mistake, my parents are just one example of the immigrant experience; of the people who truly make this country a great place for everyone and not just for those with deep pockets.

And that is why, no matter how much time passes, I’ll never be able to thank my immigrant parents enough.