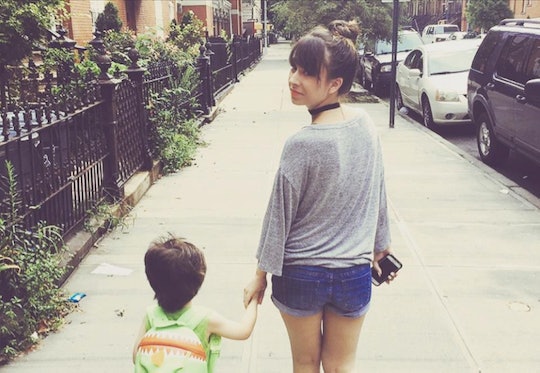 Courtesy of the author.

The year began with women staging the largest counter-protest in history, and ended with women bringing men in positions of power tumbling across industries. 2017 was a year in which women were the change they wish to see in the world. Amid the #MeToo movement and unearthing of sexual predators across industries, it has been amazing to see the power women can have as a collective. At the same time, we keep hearing that the solution is for women to simply "raise better men" — that mothers can rear their sons to act as a cure of sorts for society's ills. I'm a mom to a son and I say it's not my job to fix this f*cked up culture.

It's a slow recipe for change. You see it in New York Times manifestos on how women can raise feminists sons, and in blog posts from mothers boasting about their parenting plans to raise sons that actually respect women. There are countless tweets urging "ladies" to "raise better sons" who will respect women they don't have a familial tie to, and even Fox News articles pontificating about the "end of men" and asking if "we've forgotten how to raise boys into men" (a response to the troublesome success of the "raise feminist sons" movement). The media seems to agree that our power as mothers to shape our children is the best tool in the feminist toolkit. Fix it, they all say. Fix it yourselves, with your own flesh and blood.

I knew that when I became a parent I would have a chance to raise an ally. I knew it way before Harvey Weinstein, before Louis C.K., before Roy Moore.

I'm not saying I don't have an obligation, as a member of society, to raise a kind, decent, empathetic human being who won't wield the powers of toxic masculinity at will and ignore a woman's bodily autonomy. I am well aware of my responsibilities as a mother. But here's the thing: I knew what my role in combating rape culture was long before people waking up to the systemic nature of violence against women had the bright idea for us to simply rear an army of tiny feminists. I have long known that when I became a parent I would have a chance to raise an ally. I knew it way before Harvey Weinstein, Louis C.K., Roy Moore, Al Franken, the president of the United States, and even Bill Cosby and Brock Turner became footnotes for rape culture. I knew it before Sylvester Stallone and George Takei and Brett Ratner and R. Kelly. I knew it back when Roman Polanski and Woody Allen were considered anomalies not worth worrying about.

I knew it before I was raped by a coworker six years ago during a work retreat, suffered through an extensive rape kit, waited over a year to receive the results, and listened to the detective sitting across from me in my living room offer up apologies for and explanations as to why the district attorney would not, in fact, be moving forward with my case.

Parents want to raise their kids right, and to spare their children the dangers they themselves have endured. They know their power. A nationwide study conducted by the National Campaign to Prevent Teen and Unplanned Pregnancy in 2010 found that 46 percent of teens believe their parents are the biggest influence regarding their decisions about sex. Kate Rohdenburg, a sexual violence prevention educator in New England, told The Atlantic that "speaking plaining to children about their anatomy is an important part of her work." So I use anatomically correct language when identifying body parts — whether they be my son's or mine — so he never feels shame about his body, or judgment about someone else's.

I am doing my part, and will continue to do my part, but it is not just my job, or the job of every mother raising a son, to dismantle a culture that believes staying quiet, looking the other way, or blaming the victim is the only responses to sexual assault.

As reported in Telegram, multiple studies have shown that boys who don't secure attachments with their mothers develop behavior problems later in life. And the American Psychological Association conducted a study that showed boys who are close to their mothers have a higher chance of ignoring hyper-masculine stereotypes. So I co-slept and then I tried my hand at bed-sharing, and did the babywearing thing and breastfed for seven months. I continue to practice attachment-parenting.

Nicole Cushman, the executive director for the comprehensive sex ed nonprofit organization Answer, told Mashable that "teaching young people about sex and sexuality can fundamentally shift their views on critical issues like consent, abuse, and assault." So my partner and I teach my son about consent in age-appropriate ways — we won't cut his hair without his permission, he doesn't have to kiss and/or hug family members if he doesn't want to, and he has to ask permission before he hugs a friend at the playground — and plan on speaking openly, honestly, and positively about sex and sexuality when he's older and ready to listen.

I have spoken on panels about sexual assault and rape culture, as a survivor, and had my partner and son attend. I have volunteered for an organization that teaches consent to middle and high school students, and shared videos and pictures of my efforts with my son, describing what "mommy" was doing in a way that his naive 3-year-old mind can comprehend.

I am doing my part, and will continue to do my part, but it is not just my job, or the job of every mother raising a son, to dismantle a culture that requires a critical mass of abused women to come forward before it considers the possibility that a man is guilty.

That job belongs to everyone.

It certainly belongs to fathers, who have historically been granted the freedom to side-step the many responsibilities of parenting. Where are the men in this narrative?

According to the Father Involvement Research Alliance (FIRA), paternal involvement is "positively correlated with children's overall social competence, social initiative, social maturity, and capacity for relatedness with others." And when fathers were absent or less involved, FIRA found higher levels of hostility in children. In fact, according to FIRA, the "strongest predictor of empathetic concern in children and adults is high levels of paternal involvement with a child."

The U.S. Department of Health and Human Services, according to Parents, found that "the quality of a child's parents' marriage had as much influence on his or her future mental and physical health and wellbeing as his or her own relationship with either parent." Fathers can demonstrate healthy, consensual romantic relationships with their sons by mirroring the very same within their own partnerships, be it marriage, long-term romantic interests, or casual dating.

We ask nothing of fathers, yet they are lauded for the realization that women's rights and women's safety matter because they have a daughter, and the issue suddenly hits close to home. No, it's mothers who are targeted with raising the next generation to be better than the one that's currently failing us all.

Mothers, like the bystanders in the high-profile cases of sexual harassment and assault, are fallible. The instinct to close ranks around one of your own when they are accused of assault extends to women. A recent New York Times profile of mothers whose sons have been accused of sexual assault shows that sometimes the bond we have with our children clouds all judgement and reason. Brock Turner's mother begged her son's judge not to put him in jail, because "he wouldn't survive it." As the saying goes, "Only a mother could love him."

To hear that, as a mother, I must singlehandedly change our culture by raising a son who will be better, is like being told, as a victim of sexual assault, that I should have known better.

Women and girls experience the highest rates of sexual assault, with one out of every six American women becoming a victim of an attempted or completed rape in her life time. Sexual assault has notoriously been labeled a "woman's problem," yet it is men who are sexually abusing women at such staggering rates. So to hear that, as a mother, I must singlehandedly change our culture by raising a son who will be better, is like being told, as a victim of sexual assault, that I should have known better. That it will always be my problem to fix. It will always be my burden to carry. When I hear a call for mothers to "raise better sons," I hear: "Women, fix this."

What if, instead of telling "mothers of sons" to inspire change, we start telling all parents to simply be there? To discuss openly the invisible rules of our society — you know, so we are all on the same page. Daughters and sons need to hear: this is how we treat people. Anything that falls below this line is not OK. We are all goddamn humans, aren't we?

If we are to dismantle rape culture, we must collectively be involved in the effort. And men largely have the power to change the systemic disenfranchisement of women. Yes, those of us on the bottom of the pile can do our rabble-rousing, but it's difficult to topple the system from a point of exclusion. This is why men need to buy in.

This burden cannot rest solely on the shoulders of women alone, be it mothers, sexual assault victims, or women simply trying to make it through the day without being harassed. It's not our job to share our #MeToo stories so the rest of the world believes us. We're not the only people who should be holding the men in our lives accountable for their actions. We are not the only conduits of change.

In January, we march again. As they did before, men — sons, partners, brothers, friends — will walk alongside us. Because the only chance in hell we have of making 2018 the year in which men truly view and value women as equal is if we start dismantling this toxic culture together. We can't walk this path alone.

More Like This
Festive Mommy & Me Holiday Nail Ideas To Try
101 Advent Calendar Activities, From Books To Read To Cookies To Bake
Everyone Told Me To Date Post-Divorce, But Being Alone With My Kids Felt Better
If Your Kids Love Their Elf, You Don't *Have* To Put Him Away On Christmas