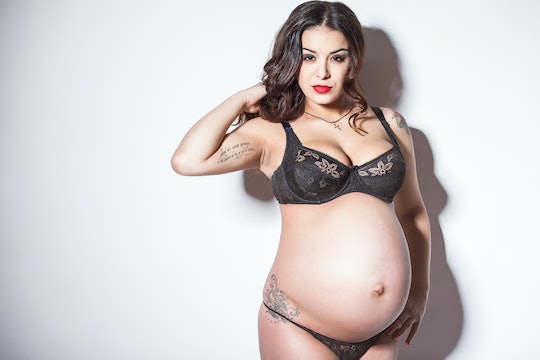 Is It Safe to Get a Tattoo While Pregnant? 3 Things Know About Getting Inked As A Mom-to-Be

Tattoos are a wonderful way to honor significant life events or people who are important to you. Getting a physical piece of permanent artwork that reminds you of someone or something you love has very special meaning. And pregnancy is a very important time in your life — and the baby you’re carrying is a very special person. So it makes sense that you might want to get some new ink while you’re with child. But is it safe to get a tattoo while pregnant?

Although it might be tempting to honor this important time in your life with a tattoo, Baby Center notes that you might want to consider waiting until after you’ve delivered to get a tattoo. The biggest reason to refrain from getting a tattoo while pregnant is to avoid the risk of infection. While most tattoo shops are clean and safe, Healthline reports that there’s always a small chance of contracting HIV or Hepatitis B from dirty needles. And you’re not just risking your own life and health when you’re pregnant — you’re risking your unborn child, too.

Most reputable tattoo artists won’t even work on you if they know you’re pregnant (and no, that doesn’t mean you should just leave that information out). Fat Ram’s Pumpkin Tattoo in Boston has a policy not to tattoo anyone who is pregnant, as does Chameleon Tattoo in Cambridge, Massachusetts. “When tattoo procedures are done clean and sterile, you’re able to eliminate risk during the actual procedure,” says Owen Beane, who works at Chameleon, “But risk and liability comes in after procedure is done and the aftercare is in the person’s hands. There exists a potential for infection,” just by nature of the tattooing procedure.

No one wants to be responsible if something happens to the fetus as a result of the tattoo — even if the chances of something happening are highly unlikely. Although there’s no real information available about how tattoo ink affects fetuses, anything that enters your bloodstream can enter theirs. If you do decide to get tattooed while carrying a child, make sure you wait until at least the second trimester, when the baby’s major organs are developed.

Another issue with getting ink while pregnant is that, if the work is on your lower back, it may affect your ability to get an epidural, according to Mayo Clinic. If it’s not fully healed, some anesthesiologists won’t put an epidural there. That being said, there’s really no research that shows dangers either way. Not only that, but your skin changes while you’re pregnant. So once you’re no longer knocked up, your tattoo could end up looking very different.

And although henna might be a non-permanent option, you should think hard about getting it if you’re not from a culture that typically uses it. For thousands of years, women in Egypt, India, and other South Asian cultures have used henna to decorate the pregnant bellies of women in their third trimester as a form of “good luck.” But if you’re not from one of these cultures, using henna can be considered a form of cultural appropriation.

In the end, waiting nine plus months to commemorate a moment is no big deal. It’s better to be safe than sorry. You can carry the memory with you in your heart until you’re able to wear it on your sleeve.