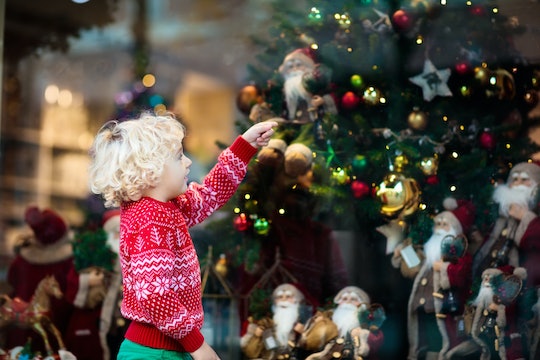 My Husband & I Disagree About Santa & It's Totally Ruining Christmas

It seems like every parent has their own philosophy regarding Santa Claus and whether or not to introduce him to their kids. Some encourage the idea of a benevolent, red-suited man delivering presents via his flying sleigh. Others believe you should be honest with your kids about this big, fat, cultural lie. And others fall somewhere in the middle, neither confirming nor denying his existence. I used to think it was fine for people to disagree about Ol' Saint Nick, until, of course, I realized my husband and I disagree about Santa. Not only is this disagreement awkward and uncomfortable, but it's in danger of ruining Christmas.

Before I had kids, I hadn't really thought much about Santa and how big a part this fictitious character would end up playing in my life. I didn't plan to introduce him to my kids, not because I had a strong aversion to Christmas, but because on the long list of parental decisions I have to make on a daily basis, Santa was undeniably overlooked. I just didn't think about him.

I mean, no one wants to have a stranger watch them while they sleep so they can decide if they've been naughty or nice.

Then, when my daughter was about 4, she came home and asked if she could send Santa Clause a letter. I didn't see any harm in indulging her, and decided to address Santa the same way I did unicorns, fairies, and Harry Potter. I was going to let her decide for herself what she wanted to believe, and I in no way was going to ruin it for her.

I did draw the line at the creepy parts of the Santa myth. I mean, no one wants to have a stranger watch them while they sleep so they can decide if they've been naughty or nice. And there's no way I would ever make a child sit on a stranger's lap. The rest, though — a jolly, friendly, caring person who flies around the world on a sleigh pulled by reindeer and gives presents to everyone — is fun, and I want my kids to have as much fun as they can while they can. Childhood should be magical, and I know there will be plenty of hard lessons my children will have to learn as they grow. I think Santa is one area of their fleeting childhood where they should be in the driver's seat. They should be granted the power to tell me what they want to believe.

So, here we are: one parent trying to facilitate the magic of the holiday season, while another tries to be brutally honest with his children.

My husband disagrees, and that's putting it mildly. We are a blended family, and long before we met he told his kids that Santa wasn't real. Plain and simple. He explained that some parents lie to their kids, but he wasn't going to be one of them. So, here we are: one parent trying to facilitate the magic of the holiday season, while another tries to be brutally honest with his children.

Before you call my husband a monster, though, you should know that even I think he has a point. In his mind it's not OK to lie to your kids about anything. He wants to be a good role model for them and thinks that lying about Santa crosses a line that he doesn't want to cross. He also wants our kids to trust him, and thinks telling even a well-intentioned half-truth may harm that trust. How harmless will Santa be if our children are devastated when they realize that he's not, in fact, real? My husband doesn't want to find out, and I think that's understandable.

He still remembers how it felt to find out that Santa was nothing more than a parent-perpetuated myth, and describes that feeling as "betrayal." So, yes, my husband has a point. But, selfishly, I don't want to be the one to burst my kids' bubbles. And while I don't want to dismiss my husband's experience, I don't remember being angry with my parents at all when my big brother shattered the Santa myth for me. I was mad at my brother, for sure, but I was too young to really think about my parent's role. I certainly didn't consider them monster human beings I couldn't trust.

How harmless will Santa be if our children are devastated when they realize that he's not, in fact, real?

So yeah, we've had more than a few awkward moments when my step-kids have started to tell my kids "the truth" about Santa, or when they roll their eyes when they get gifts from Santa on Christmas morning. My kids still want to believe, though. They're still writing him letters, asking to visit him, and leaving him cookies. I want to keep going as long as they want to, but it's hard when my husband and I aren't on the same page and our kids want to know who's right. My answer, as it is for most things, is to ask them, "What do you think?" But my husband and I both know that's only going to last so long.

As Atheists, we agreed that we want to teach our kids to be skeptics, but we totally disagree about how to achieve that goal. I think that learning to believe in Santa, and then figuring it out on their own, will help our kids develop healthy reasoning skills. If we allow our children to be open-minded, to question, and to explore the world, they will almost inevitably become skeptics. My husband thinks that it's unfair to lie to them to achieve that goal.

He's on the side of truth and honesty, and I would kind of like to save harsh truths and difficult lessons about how sterile life is for a later date, when they're older and after they've enjoyed a period of make-believe and fun.

He's on the side of truth and honesty, and I would kind of like to save harsh truths and difficult lessons about how sterile life is for a later date, when they're older and after they've enjoyed a period of make-believe and fun. So yeah, this time of year pretty much sucks.

Who's right? I'm not going to lie, I have no freaking idea. I also have no idea how to resolve our dilemma or what, if anything, to tell our youngest child when he's old enough to hear about Santa from his friends. But for now, and until my kids tell me otherwise, Santa is real. Just like unicorns, Hogwarts, and the tooth fairy. This is one area where my husband and I will have to agree to disagree.