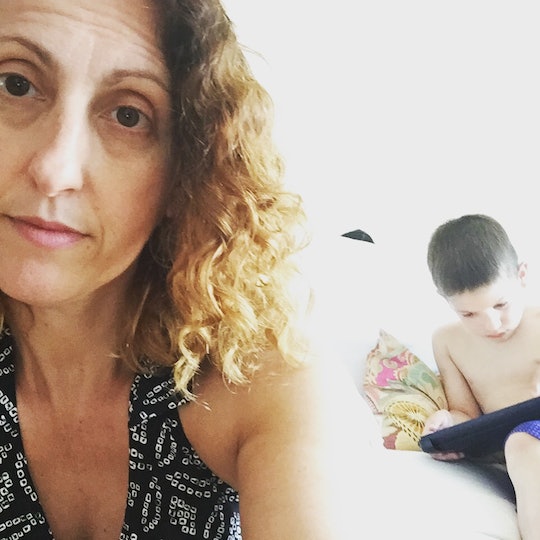 The One Thing Every Mother Wants To Do, But Never Will

Parenthood is basically a never-ending list of things you want or have to do. Just when you think the laundry’s done and the dishes are (sort of) put away, there are lunches to pack, check-ups to schedule, and school forms to fill out. Then, of course, there's the stuff that you can’t even plan for — ear infections, lost coats, broken [fill in the blank] — that lays waste to anything you planned on getting done. Frustration sets in. Anger is ignited. Things start to feel impossible. Then, if I'm being honest, there is the one thing every mother wants to do, but never will. It's usually on the bottom of that never-ending list and it's more of a necessary "dark thought" than an action you plan on facilitating, but it's there and it sometimes bombards your over-worked, exhausted brain and acknowledging that it is exists is just as important as never actually doing it.

Everyone warns you how tough being a parent is. In the same breath, they’re quick to say that it’s worth it. “It doesn’t get easier, but it gets better,” was a friend’s advice after I shared my pregnancy news, and I’ve found that to be somewhat true. As my kids grow, the challenges of parenting them have evolved. I don’t miss the toddler stage, but having a tween is no picnic either. Things stay difficult in different ways because, well, even though potty training is behind me there are plenty of equally frustrating challenges ahead. You know that saying, “Keep making new mistakes?” That sums up parenthood perfectly. I’m done screwing up my kids as toddlers. Now I can focus on ruining them as grade schoolers.

Nobody expects us to be perfect parents, and we need to keep the pressure off ourselves. I try not beat myself up when I’ve had a day spent yelling too much at my kids. I work hard to treat myself like I would a friend, someone who needs encouragement when she doesn’t think she can turn a bad bedtime routine around. Every day I get a do-over, and I need to find more solace in that. Recognizing those moments when I kept my sh*t together, avoided yelling, retreated into the bathroom for a mom time-out,and emerged calm and collected to see a third grader’s fit through, is not only necessary, it's me being kind to myself. It is hard work to weather some parenting storms. I have to remind myself that congratulations are in order every time I don’t raise my voice.

Because when I’m raising my voice, I’m not always trying to be heard over the whine of my children. I’m not always trying to get their attention when they’re at each other’s throats which, at ages eight and six, is daily. Usually, when I’m raising my voice, it’s to overcome my child. To be louder. To be bigger. To be tougher. To prove that, hey, “You don’t mess with me.” In those moments, when my voice is rising and my patience is shrinking, they have pushed me too far, tested my tolerance too much, and dared me to react to their deliberately uncooperative behavior. In that moment, I want to scream at them the one thing I’m sure every mother thinks, but rarely says and definitely doesn't actually mean.

I want to open my mouth and hurl, like an army of poison arrows, the words no child should ever hear:

I would definitely regret letting that hurtful sentence escape from my mouth. How could my children recover from their parent shouting this? I know there are kids out there who do have these and other ugly, shaming, soul-crushing words tossed at them. My heart aches for them. My chest actually tightens and tears form in the corner of my eyes when I think of them. I want to tell them that they're wonderful and loved and that they don't deserve to be hated. I know that, for many children, what I quickly think but don't mean and refuse to say, is something they hear on a daily basis, and that's wrong. That's so sad and hurtful and, just, wrong.

I also understand that caregivers tasked with raising human beings can get consumed by the difficulty and thanklessness of parenting. The emotions behind hateful thoughts are relatable because we have all been there. We have all lost our "cool" and been pushed "too far" and have thought about walking out our home's front door and never coming back. But we are the grown-ups. Parents have to get in control. As much as I want to tell my 8-year-old kid how I really feel when she’s been screaming and stomping her feet and slamming her door and rolling her eyes and crying and screaming and telling me that I don’t care about her — all because I won’t let her cross the street by herself — I never will. How would throwing hate in her face help to build trust in our relationship? How could I expect her to reciprocate love, if I give her hate, even if that hate isn't genuine and even if that hate is the result of an immense amount of frustration and exhaustion? How could choosing to express my exasperation and feelings of failure as a mom, in such a cruel way, show her how to manage her anger in a healthy way?

I come close sometimes, I’ll admit it. If the windows are open during a particular break down when my children are acting their absolute worst, I am positive the whole block can hear me yelling. Still, regardless of how frustrated I am or how upset I become, I stop short at the word “hate.” I know she, and I, would never recover from me losing control of my emotions and telling her something so hurtful. Points of no return do exist.

Plus, that fleeting sentiment of "hate" isn't a true representation of my feelings. Even in that excruciatingly tough moment, I do not hate my child. I may feel hate, but in the calm after the storm, when the clouds of my rage have cleared, that “hate” was not towards her at all. It was how I felt about the moment. It’s unnerving to feel that you’re losing your cool because your kid is just trying to make sense of your reasoning, using just the few years of her experience as a person on this planet to try and express discontent. I have to remind myself that I am the adult. The only way my children will learn how to manage their emotions in a healthy and effective way, is if I can manage to stay calm, reiterate safety, and never, for a second, let them doubt my love for them.

I feel ashamed for having hateful thoughts, but I am learning, too. Just because I’m the adult or the parent or the grown-ass woman, doesn’t mean I don’t have more growing to do. My kids finding the cracks in my emotional armor is, in the long run, a way for me to become an even better parent to them.

It isn’t getting easier. It doesn’t usually feel like it’s getting better, either. But I’m getting used to dealing with scary feelings — theirs and mine — and navigating through them to land us far away from hate, and always on love.