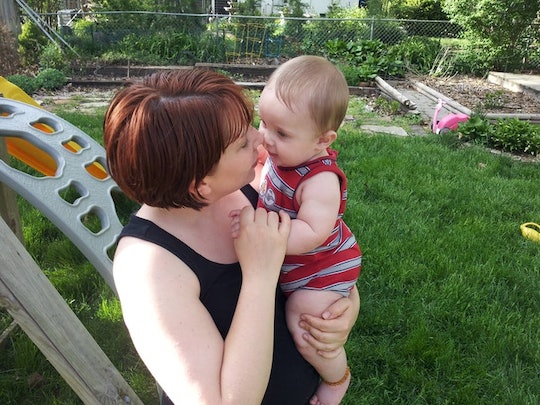 After I became a single mom I started to worry I would be alone for the rest of my life. It's not just that dating as a single mom was hard, because at times it was pretty damn impossible to find the time, energy, and emotional where-with-all to date, but I made things harder than they needed to be. I wish I could go back in time and help make dating as a single mom easier for myself, because there was one very big piece of the puzzle I just couldn't seem to grasp. And that piece ended up being a paramount lesson that I have carried with me, even now that I'm no longer a single mom.

So, what was that necessary, important lesson? That I didn't need to apologize for being a single parent. And neither do you.

Sadly, as a newly-single mom I apologized all the damn time. I apologized to my dates for having kids, like my decision to procreate was some kind of character flaw and my children were a downside to dating me or a part of my life I should ignore. I apologized to my kids for leaving them with a sitter so I could enjoy a date or a night out on the town, and even when I knew it was actually a good thing for all of us that I had that time to myself and/or with other adults. Mostly, I apologized to anyone who criticized me for dating as a single mom... and believe me, there were a lot of critical people that came out of the woodwork.

At times it felt as though people expected me to be single and celibate for the rest of my life; a punishment for procreating with a person I didn't end up staying married to. Before I knew it I felt like I had been transported back to the Victorian era and expected to go through some unknown period of mourning before I could start allowing suitors to court me. My family, friends, co-workers, and even people I hardly knew said things like, "you need to focus on your kids now" and "you don't need to go out," as if I should feel ashamed that I wanted to have some fun or sex or enjoy things other grown-ass human beings enjoy. To so many people in my life, doing something for myself and being a good mom weren't compatible.

I reclaimed my identity and learned to love parts of myself that had been buried by my tumultuous marriage.

As a single mom adjusting to her new life, the last thing I needed was to feel like my very existence was somehow an inconvenience, or wrong, or something worthy my endless apologies. Still, I said sorry more often than not, because I was made to feel as if who I was and where I was in my life was fundamentally wrong.

I remember one evening when my car broke down in the middle of a rain storm. When I called the guy I was dating to vent, he told me I should suck it up because I had "chosen" to become a single mom. For his benefit, I needed to stop being "such a downer." The details of my life, from the minuscule to the monumental, all hinged on my relationship status.

Sadly, I ended up apologizing to him.

I had left my marriage of over a decade with my self-esteem in shambles, and with literally no clue how to date or what I was looking for in someone to date. In other words, I needed to figure some serious sh*t out, and for myself. So I did. I reclaimed my identity and learned to love parts of myself that had been buried by my tumultuous marriage. I also figured out what I was looking for in a partner and told people right out of the gate. The idea that I had to keep apologizing for doing something very healthy, and beneficial, and productive seemed increasingly... wrong.

I didn't owe dates an apology for my past, my kids, or my inability to change plans on a moment's notice.

When I first started dating, I was shocked at how different it was. Thanks to the advent of online dating, I was able to take a small looking into someone's life and see what they were like before investing too much time and energy on them... so that's exactly what I did. As a single mom it wasn't easy to find time to eat, or sleep, let alone go on blind dates that had a very high chance of being complete bust. I didn't want to use my precious alone time to invest in someone that was going to end up wasting my time or, worse, make me feel bad for being a mom.

So while it took me a while to feel more unapologetic about my relationship status and dating life, eventually I realized that this whole "apology tour" thing wasn't necessary. In fact, it was detrimental to my self-esteem and sense of self-worth.

I didn't owe dates an apology for my past, my kids, or my inability to change plans on a moment's notice. I definitely didn't deserve to feel guilty about being a single mom. Having children isn't a flaw, and realizing that a relationship is no longer healthy, or beneficial, or sustainable is a strength, not a weakness. I wasn't going to continue to apologize for having the courage to be who I wanted to be, and who my kids needed me to be. I just wish I would have realized that sooner.

Being a single mom was part of who I was, and definitely not something I needed to feel ashamed about. In fact, I think being a single mom made me a better partner, a better parent, and an all-around better person. I learned what I wanted in a romantic partner and a relationship, and how to prioritize myself in that equation so that I didn't lose myself in a long-term romance. I became self-sufficient, I learned how to budget my money and time, and I became infinitely more patient.

So after a year of dating the wrong people for the wrong reasons, having some much-needed and much-deserved fun, and apologizing way too much for simply existing as a single mom, I am happy to report that I found someone who didn't expect me to apologize for anything. He accepted me for who I was and because I was single mom, not in spite of it. And though it took a while to get there and realize my value, the relationship I now share with my husband is the relationship I deserved.