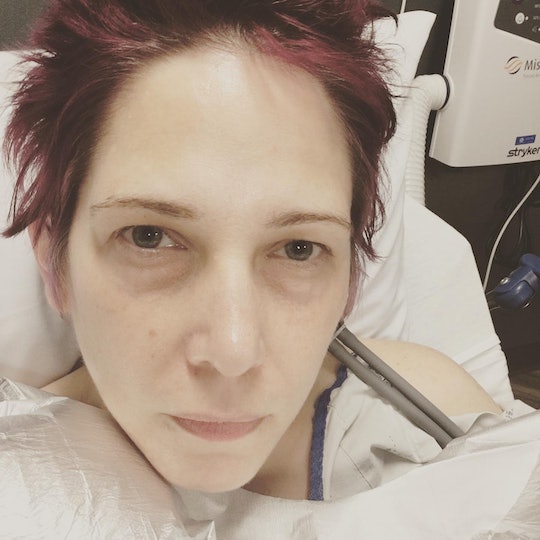 I've been pregnant, on birth control, or breastfeeding my entire adult life, so I sort of forgot what having a period was like. I have vague memories of staying home from school with a heating pad, but as I got older I assumed I had outgrown those mind-numbing cramps. But after my last child was born I got a tubal ligation, and getting my tubes tied, to my surprised, impacted my period. So, eventually, I found myself sitting in front of a doctor, asking, "What is an ablation?"

After decades of managing my cycle with the magic of hormonal birth control, tying my tubes brought Aunt Flo back with a vengeance.

After my tubal ligation my period was inconsistent, sometimes showing up twice in a single month. My flow was so heavy that I would bleed through tampons and pads in minutes, and so unpredictable that I would find myself stuck somewhere without a tampon or dealing with stained sheets. My cramps were no laughing matter, either. All I wanted to do was lie on my couch with a heating pad, which isn't really an option for a busy, working mom.

I made the mistake of Googling my symptoms, which as any parent or living human can tell you is often a disastrous decision. But after wading through some scary diagnoses, I learned about menorrhagia, the medical term for for a heavy period. According to one review published in the British Medical Journal, menorrhagia impacts 25 percent of women and other people who have periods during their reproductive years, and that percentage is even higher for people in their 30s and 40s.

After realizing I wasn't alone, I started wondering if there was anything I could do about my heavy period. I didn’t want to go back on birth control after getting a tubal ligation, and I even if I did I wasn't sure if it was safe. Still, I was willing to try just about anything to get my period back to "normal," or at least to a point where it was more predictable and didn't last an entire month.

I made an appointment to see my OB-GYN right away. During that visit I learned that it's not normal to have a period that lasts longer than a week, and can be a sign of an underlying health condition like fibroids or cancer, per the American College of Obstetricians and Gynecologists (ACOG). A longer period can also lead to health problems, like anemia.

Even if ablation isn’t right for you, you deserve to have your period concerns heard.

And that's how I found myself sitting half naked in an exam room, feeling awkward and worried about the conversation I was about to have with the the same person who delivered my youngest child. And while I was mildly concerned that my doctor would dismiss my concerns (painful periods are normal, right?!) I also knew my doctor had an intimate knowledge of my reproductive history; a history that, at least in my opinion, proved I needed medical attention.

So when I told my OB-GYN about my symptoms — a heavy period, bad cramps, and frequent breakthrough bleeding between cycles — she immediately ordered a biopsy and scheduled a consultation to discuss my options.

After my biopsy came back clear, my doctor and I sat down for a chat. She told me, in layperson‘s terms, that my hormonal cycle and my abnormal endometrial lining resulted in uneven growth, and unclear signals being sent between my endocrine system and my ovaries and uterus. All of this miscommunication resulted in an uncommonly heavy period, sometimes occurring more than once a month.

The good news was that I had options. I could go back on hormonal birth control until menopause, take progesterone to cause my lining to grow and shed on a schedule, or have a surgical procedure called endometrial ablation, which destroys the uterine lining with heat or radiation, resulting in your period getting lighter... or even stopping entirely.

Looking back, I wish I would have asked my doctor about my options two years ago.

I opted for ablation. My doctor scheduled my appointment for a few weeks out, and explained that it would be a relatively simple outpatient surgery that did come with a few risks, like damage to my uterus or an infection.

This surgery itself was no big deal. I actually don’t remember much about being at the hospital, but the anesthesiologist explained that they would give me a sedative and the put me under general anesthesia for just a couple of minutes, during which my OB-GYN would insert the device that would, hopefully, end my period forever.

After heading home with a heating pad, and a prescription for pain medication in case I needed it, I took a few days off to recover. I was relieved to discover that my post-ablation pain level was way less than it had been after childbirth, and definitely less than it had been after my tubal ligation. In fact, the post-surgery pain was only marginally worse than my period. I did experience a tiny bit of spotting, but it subsided in about a week.

According to my doctor, it will take a few months before we know how my cycle will be in the future and after my ablation. If it doesn’t get better, we can talk about a hysterectomy — another, obviously more evasive procedure.

Looking back, I wish I would have asked my doctor about my options two years ago. I had no idea that ablation was even a thing, and certainly didn’t expect my doctor to offer me one without blinking. I wish horrible periods weren’t just the punchline of jokes, and that the pain associated with them was taken more seriously... or at least as seriously as my doctor took my pain.