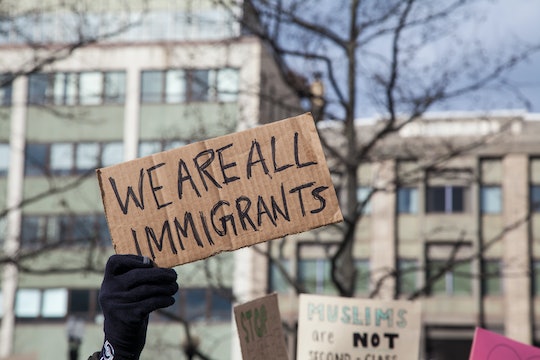 7 Immigrant Moms Share Why They Came To The U.S.

The stories of immigrants coming to the United States are as diverse as the people who have lived them. There are people in this country who came simply because they knew the U.S. to be a “land of opportunity," and others to flee the dangers of wars, drug cartels, religious persecution, and gangs. Some were displaced by natural disasters that destroyed their homes and left them with nothing, and others to reunite with their families. In other words, we must listen to the reasons why immigrants come to the United States so that we can better learn how to support them, rather than fear them.

My own mother came to the U.S. in the 1980s while the nation she was born and raised in was ravaged by a civil war. Born into a dictatorship, she grew up in the midst of a coup that led to a communist uprising. She came to this country because my father, her husband, was forced to flee at the start of the war. He didn’t want to fight for either side (knowing neither would bring about the kind of good they promised), and was put on a kill list as a result. My mother was pregnant, though, so she decided to stay behind.

She gave birth and waited until my brother was 3 before she left her homeland (including her job as a teacher, and all of her family and friends) to join my father in Miami, Florida. I was born in the United States because she was willing to sacrifice everything to reunite her family and leave the constraints of a regime behind. She wanted her son to have a better life and more access to opportunities, and make no mistake my brother and I have had more opportunities because of her sacrifice.

I spoke with some immigrant moms (and first generation moms) who told the stories of why they were here in the United States. Hopefully, if you’re still unsure as to why people leave their lives behind in their countries of origin to start over in a new, foreign, and even hostile land, their answers will clear things up: