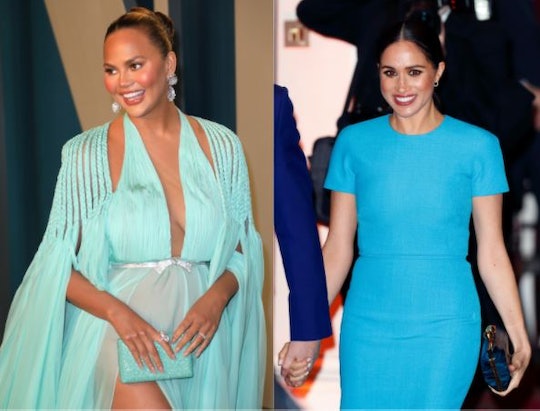 Both moms share a common loss and have been supportive of one another.

Some have likely suspected it already, but Chrissy Teigen has revealed that she and Meghan Markle are friends. Teigen talked about their friendship during a virtual episode of Watch What Happens Live with Andy Cohen and shared that the Duchess of Sussex is “a really wonderful person.”

Teigen shared that she and the Duchess of Sussex both bonded over their shared experiences with pregnancy loss. During her appearance on Watch What Happens Live With Andy Cohen, Teigen revealed that Markle had written her a letter after she and John Legend lost their son Jack last year at 20 weeks gestation. “She’s been so kind to me ever since we connected,” Teigen told Cohen. “She had written me about Baby Jack and loss.”

The Cravings cookbook author shared this wonderful little factoid after Cohen read a question from a fan, asking Teigen if she and Markle have connected since she has defended the duchess so often in the media. “She is really wonderful and so kind, and just as kind as everyone says she is,” Teigen went on to say of Markle, who now lives in California with Prince Harry and their son. “And that’s why you look and everything and you’re like ‘my God, what is absolutely wrong with people where they have to make this person out to be so malicious and so crazy.’ When it’s just as simple as them being as kind as everybody says they are.”

A month after losing Jack, Teigen came to Markle’s defense when the duchess published an essay about her own miscarriage in The New York Times and some criticized the duchess for talking about it publicly. “Award for today's absolute piece of s**t goes to [Twitter user] ... Congratulations, piece of s**t,” she posted in a now-deleted post. On Oct. 27, 2020, Teigen had penned her own essay in Medium about her pregnancy loss.

This past March, Teigen also made a plea to Twitter trolls to back off the pregnant duchess, who’s currently expecting her second child, following the backlash Markle and Prince Harry had gotten following their interview with Oprah Winfrey. Needless to say, these two moms have each other’s backs.

Markle and Prince Harry, who are already parents to nearly 2-year-old son Archie, are preparing for the arrival of their baby girl sometime this summer, and are reportedly preparing for a home birth. And now that their friendship has been confirmed, it’s quite possible playdates between Archie and Teigen’s kids — 5-year-old daughter Luna and 2-year-old son Miles — could happen in the future.