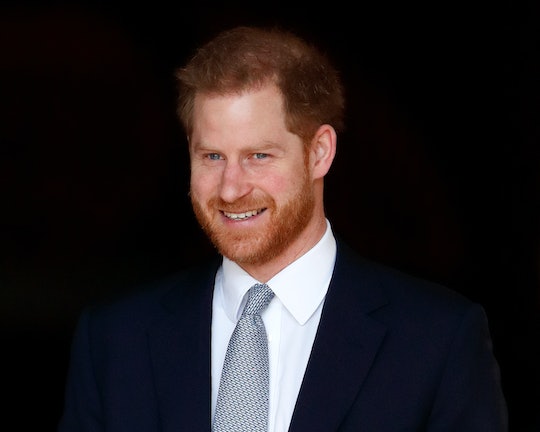 The prince is apparently a fan of the 2006 rom-com Employee of the Month.

Over the past few months, Prince Harry has been incredibly open about his life as a member of the royal family, a husband to his wife Meghan Markle, and a father to their son Archie. The Duke of Sussex was candid once again when he appeared on Dax Shepard’s Armchair Expert podcast and even revealed that Archie’s chickens have all of their feathers now.

Harry traveled from his home in Santa Barbara to Shepard’s guest house attic, where he sat down with the podcast host and his co-host, Monica Padman. Throughout the episode, the Duke of Sussex covered a lot topics. He talked about what it was like growing up in the royal family and how he came to his decision to step down from his senior position. “I’ve seen behind the curtain,” he said. “I’ve seen this business model and seen how this whole thing works and I don’t want to be a part of this.”

From parenting to paparazzi, here are 11 of the best, most revealing takeaways from the prince’s appearance on Armchair Expert.

1. He Addressed Those Photos Of Archie On His First Day Of School

Harry and Meghan have been strategic when it comes to sharing photos of their oldest child, but that hasn’t stopped paparazzi. Some have even gone as far as to accuse the couple of posing for the paparazzi after photographers caught Meghan and Archie out and about on Prince Louis’ birthday in April. But this wasn’t the case. Harry revealed paparazzi were there to take pictures of Archie on his first day of school, which they weren’t expecting. “It’s a feeding frenzy, here,” he admitted about living in Los Angeles.

“First of all, we didn’t mean to live in L.A. — this is like a staging area before we find a house,” he said, referring to the time that he lived in Tyler Perry’s house before settling down in Santa Barbara. “Secondly, how sad that if you live in L.A. and you’re a well known figure, you just have to accept it.”

2. Three Moments In His Life Left Him Feeling “Completely Helpless”

Harry admitted that there are a few moments in his life where he felt like he had no control — one of these times being with his late mom, Princess Diana. “That’s my biggest sort of Achilles heel — the three major times I felt completely helpless,” he said. “One, when I was a kid in the back of my car with my mom being chased by the paparazzi, two was in Afghanistan in an Apache helicopter, and then the third one was with my wife. And those were the moments in my life where yeah, feeling helpless hurts. It really hurts, and that’s when you get to think yourself, ‘S—, like, I got the privilege. I got the platform. I got the influence, and even I can’t fix this. I can’t change this.”

3. He Compared His Upbringing To The Truman Show

Harry said that his life growing up was a mix between The Truman Show — the 1998 film starring Jim Carrey who discovers his whole life is a TV show — and “being in a zoo.”

“I am not the main attraction,” he joked.

“The biggest issue for me is, being born into it, you inherit the risk,” he explained. “You inherit every element without choice and because of the way that the U.K. media are, they feel an ownership over you. Literally, like a full-on ownership. And then they give the impression to most of their readers that that is the case. But I think that is a dangerous place to be, if you don’t have a choice.”

4. He Once Had An Incognito Meet-Up With Meghan At A Supermarket

Although he grew up in the spotlight, he did get to go to the store with his mom as a kid, “only a handful of times” before “getting pounced on” by photographers. This made those early moments of dating his wife that much sweeter — when they got to pretend to be just your average couple at the store.

“The first time Meghan and I met up for her to come and stay with me, we met up in a supermarket in London, pretending we didn’t know each other, texting each other from the other side of the aisles,” he said. “There’s people looking at me, giving me weird looks, and coming up to me and saying, ‘hi.’”

5. Being A Prince Isn’t A Fairytale

According to Harry, being an actual prince doesn’t mean you’re actually living a fairytale. “I do think that kind of old way of thinking — of the prince, the princess — all these little girls thinking these wonderful things about fairytales thinking ‘all I want to be is a princess.’ And I’m thinking um...,” he said.

Harry quoted his wife who has said it best. “You don’t need to be a princess, you can create the life that will be better than any princess.”

Those chickens that were seen in the interview with Oprah Winfrey living in “Archie’s Chick Inn,” are doing great by the way. “They’ve all got feathers now,” Harry said. “They were all rehabilitated from factory farms, anyway, they all came butt naked with feathers out of their chin and maybe one out of their stomach.”

“They started laying eggs immediately, which made us quite proud as parents,” he said. “And now they’re running around, fully feathered.”

7. He Doesn’t Want To Pass On Any “Suffering” To His Kids

Harry said that he is learning from his own upbringing when it comes time to parenting Archie and his second child, a baby girl, on the way. “When it comes to parenting, if I’ve experienced some sort of pain or suffering, because of the pain or suffering my father or my parents have suffered, I am going to make sure that I break that cycle, so I don’t pass it on,” he explained.

“There’s a lot of genetic pain and suffering that gets passed on anyway. As parents we should be doing the most that we can to say, ‘That happened to me. I’m going to make sure that won’t happen to you.’”

8. Moving His “Whole Family To The U.S.” Wasn’t Part Of The Plan

He did say, however, that moving his entire family to the United States wasn’t part of the plan he had for himself. “But sometimes you have to make decisions to put your family first and put your mental health first,” he explained.

“Life is a roller coaster ride,” he said. “The bad stuff that happened — what can we learn from it.”

Just like he admitted in his interview with James Corden, he has only seen “elements” of the Netflix series The Crown, which is about the royal family, but won’t admit to watching full episodes. “I hear it’s very popular,” he joked.

10. Being In Nature Is “Therapy” For Him

While Harry said he doesn’t think he “needs” therapy anymore, he wants it. Therapy can be sitting down with a licensed medical professional and talking about life for some, but therapy for him is also “nature.” “Like going for walks, throwing the ball for my dog down the beach and stuff like that,” he shared.

“There are certain things around the world that are free, some you have to pay for. But ultimately, go searching for the things that make you feel good about yourself. That’s the key to life. Get rid of the bad stuff, get rid of the hate, just focus on the good, and your whole life turns around from that.”

Or at least, he knows about the 2006 film starring Shepard and Dane Cook who play two employees at a discount retailer, vying to win the affections of the new cashier played by Jessica Simpson. “I’m a big fan of Employee of the Month, by the way,” he joked after telling Shepard that the people taking photographs and “profiting off of your misery” are the same people who “enjoy your movies.”