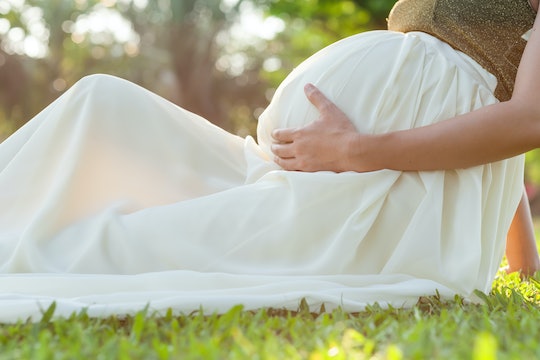 Women have been gestating babies for generations. Literally thousands of years. Still, the media never seems to capture pregnancy accurately. Sure, things have improved since I was a kid and every sitcom featuring a birth showed a woman waddling to the door with a hand on her back while her flustered husband seemed to be taken completely by surprise that the baby would actually have to come out some time. But even in 2016, there are media depictions of pregnancy that every pregnant woman hates. From the way pregnant women are represented in movies, advertisements and on our favorite television shoes, it is clear our culture has complicated feelings about a woman's superpower to grow a human being.

For example, I have never seen an athletic wear brand feature a pregnant woman safely working out, yet I was an avid gym goer throughout my first pregnancy, taking my last spinning class on my due date. Pregnant ladies like fancy lingerie too, but you wouldn’t know it looking at ads for intimate wear. I’ve rarely watched a storyline about a pregnant woman unfold on TV or in film where she wasn’t surrounded by either a bunch of other pregnant women, or dudes, or just an ensemble cast befuddled by her pregnant state. It’s like the media can’t wrap their head around the idea that pregnant women are still women, and can be found in pretty much all the same situations that non-pregnant women are seen in (except when it comes to roller coasters).

We really need to step up our game to include more representation of pregnant women in scenarios that aren’t solely centered around motherhood. The more we see pregnant women in the media doing all the things, the less of a stigma pregnancy will be. It will advance the fight towards parity, for all women, when images of us represent the variety of shapes we come in. So, as we rally for better representation of our pregnant selves, let’s take a moment to reflect on the following media depictions of pregnancy that every pregnant woman hates, to motivate the movement towards more inclusive (and accurate) imagery: