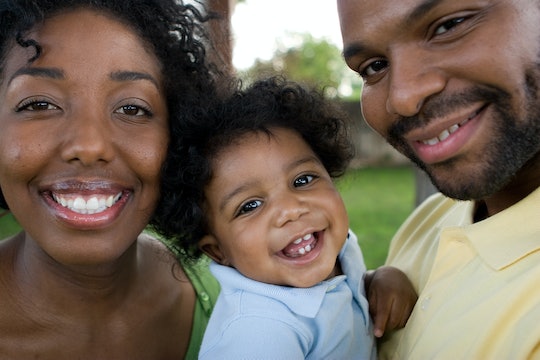 When I finally announced my pregnancy to friends, family, coworkers and acquaintances, I heard a lot about "sacrifices." Of course, the majority of those "sacrifices" were things I was going to forfeit as a soon-to-be mom. I was going to sacrifice my body and my sleep and my time and possibly my friendships. Some people were right, many were wrong, but what I didn't hear about were the sacrifices my partner would be making, too. No one seems concerned about the things he'd be giving up, as a father. Thankfully, the sacrifices my partner made the first year of parenthood ended up saving me, in ways I wasn't really cognizant of until I was in the throes of postpartum life, needing someone to go through this thing called parenthood with me.

Now, I think it's important to clear up what I mean when I say "sacrifice," because that's such a heavy-handed word that evokes a lot of emotion and assumptions. I don't necessarily consider the things my partner did for me (and our son) to be "sacrifices" in a way that caused him suffering or where particularly difficult or were even something far and beyond what should be expected of any involved co-parent. What my partner did for me that assisted me in taking care of our son, and assisted our family in functioning when we were trying to figure out how we were going to parent, aren't really "sacrifices," but necessities. However, he was sacrificing the same way I was sacrificing. For example, getting up in the middle of the night when I would rather sleep, is a sacrifice. Waking up early to feed my son when I would rather have a lazy Saturday morning and sleep in, is a sacrifice. Necessary? Of course. Still kind of a pain? Absolutely.

So, while I knew I would be sacrificing certain things for our son, it was refreshing to see my partner sacrificing, too. After all, we made the decision to become parents together, which meant we would eventually be parenting another human being, together. With that in mind, here are a few "sacrifices" my partner made that ended up saving my ass the first year of motherhood. #Teamwork