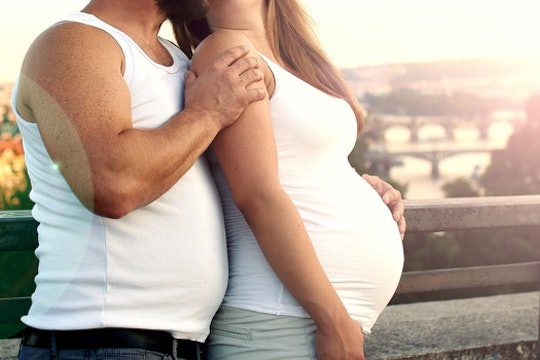 I’m all for co-parenting, but I am not down for use of the person plural when couple’s announce they’re expecting. “We” are not pregnant, unless both partners are actually, physically gestating a fetus for nine months. So, like my aversion to guys saying that “we” are pregnant (when they’re really talking about their partner, who is physically with child), I think there are things about pregnancy men don’t get a say in. I have no issue with guys saying “We are expecting,” or even, “We are going to have a baby.” All true. However, unless you have the reproductive equipment to make it possible, a self-identifying man, in my opinion, shouldn’t wander in that territory and lay claim to something he isn't personally, physically experiencing.

To be fair, I completely understand why men, sometimes, chime in on pregnancy topics. I mean, it’s kind of a big deal. I remember being in awe of the whole process of conceiving, proudly proclaiming, "It actually worked!" I spent decades trying not to get pregnant so when I, and my partner, were ready, it was kind of incredible that, well, there it was. A soon-to-be baby.

I don’t think I’m taking anything away from the experience of being an expectant father when I suggest that there are certain things men should hold off commenting about. There is so much that their female partner (or surrogate) is physically going through that it is impossible to replicate. Asking men to curb some remarks, or ways of thinking about pregnancy or decisions that need to be made before, during and after a pregnancy, is really just asking them to respect the agency women have over that experience. No doubt, expecting dads are dealing with some serious emotions, anticipating the birth of their babies and not being able to completely participate, 100 percent in the process and, eventually seeing their partner in pain. However, they're not nearly as affected as the woman who is giving up a lot to grow and sustain and birth a healthy baby. That part is all on her.

So, in addition to ditching the “we’re pregnant” vocabulary, here are some things about pregnancy that I don’t think men should get a say in. Sorry fellas, but it's just good ole common sense.