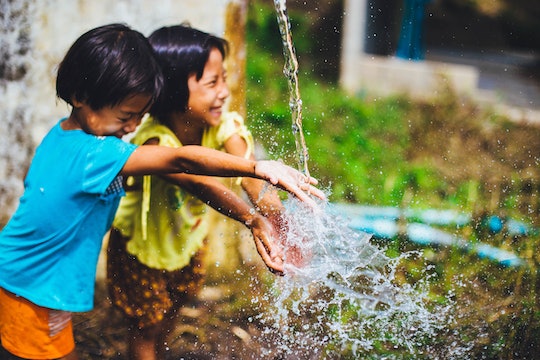 Being overly friendly was never an issue of mine growing up. I was shy and it took me a while to warm up to people, let alone befriend them. My daughter was more like me when she was a toddler, but as she got older — and more used to being thrust into new environments, like day camp and after-school programs — her shyness became less pronounced. Her younger brother has always been a "joiner," so I never had to encourage him to use his social skills. However, there are times I I think my kid might be acting a little too friendly, because a child’s right to friendliness ends where another child’s discomfort with being approached begins. I know, because I was often the child who was uncomfortable when being approached.

I am proud of my children when I see them approaching a kid on the sidelines and in an attempt to include them in a group activity. However, I have to make sure my child doesn’t start insisting that the other kid get in the game. It can be hard for friendly kids to understand why another person wouldn’t want to join them, and even as a formerly shy child (and currently introverted adult), I find it difficult to articulate the reasons why certain people would shrink away from or decline an offer of friendship. As my children have gotten older, though, they are better able to grasp the concept of shyness, and are better equipped to understand that it may take some kids a while to get used to them before agreeing to play with them.

So while I’m grateful that my kids wear their inclusiveness on their sleeves, there are times when they might be displaying signs of being over-friendly, and the following moments require my close attention: