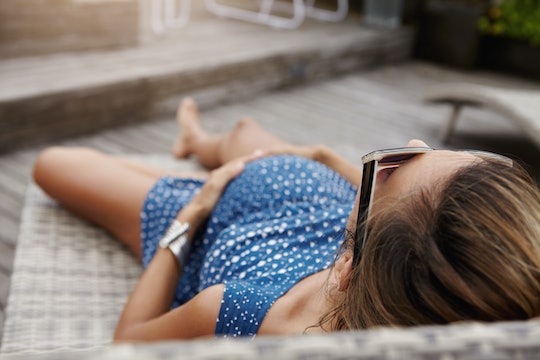 21 Reasons Being Pregnant In August Is The Best

I had my first son on Aug 6, 2014, and my second son was born Nov 17, 2018, so I have been pregnant in August twice. And both times, I have to admit, I felt pretty damn miserable. But there were undeniable moments of bliss and reprieve that made the entire ordeal far more manageable, and looking back on my experience I can tell you that there are far more worse things than being pregnant in August. Like being pregnant in the dead of winter, when you have to fear slipping and falling every second of every day.

Will you be sweating your you-know-what off when you're pregnant in August? Sure. Will you watch old episodes of Game of Thrones and think the Kingdom of the North looks incredibly inviting? Probably. But there are wins to be had here, my friends. There are reasons to celebrate being pregnant in August, I can assure you. In fact, just peruse the following and tell me that, in the end, this whole "being pregnant in August thing" isn't that bad:

More Like This
22 Valentine's Day Pregnancy Announcement Ideas Sweeter Than Candy
Fun, Sexy Maternity Lingerie, For When The Mood Strikes
58 Perfect Literary Boys Names
32 Zippy Girl Names That Start With “Z”
What Parents Are Talking About — Delivered Straight To Your Inbox