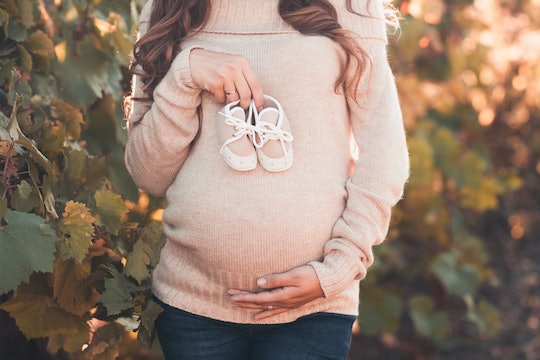 I was thrilled when I found out I was pregnant with a girl. But then again, I would have been thrilled if I was pregnant with a boy, too. My husband was also excited, as he secretly wanted a girl, but other people? Well, unfortunately other people said super creepy things to my partner after we announced we were having a girl. And very quickly, my blissful haze of excitement dissipated and morphed into a sense of apprehension with a sprinkle of anger. I also realized why so many people choose to keep the sex of a fetus a secret: revealing the sex usually means being on the receiving end of unsolicited sexist and lowkey offensive comments.

I must have been naive, or maybe just so ingrained into this sexist world of "norms" that I didn't realize these blatant gender stereotypes were on the tip of everyone's tongue. As soon as everyone knew we were having a girl, our house filled with dresses and headbands and baby high heels (barf). My partner and I heard countless, ridiculous comments and assumptions about who she was going to be, how she would behave, and how we would have to parent her as a result.

The most irritating comment I received was "good luck," because obviously girls are "a pain" and "hormonal" and "emotional" and, as a parent, I was going to struggle. I received a ton of comments I didn't appreciate and that without a doubt got under my skin. My husband, however, got the worst of it, because everyone had just assumed he wanted a boy and was upset over the news that, instead, he was going to be a father to a healthy baby girl. So, everyone from family to strangers, said some version of the following:

More Like This
What NICU Means & What To Expect From A NICU Stay
New Report Shows 80% Of Pregnancy-Related Deaths Are Preventable
Experts Explain Whether It’s Safe For Your Baby To Sleep On Your Chest
Zaya Wade Is Rocking New Long Hair & As Gabrielle Union Put It, She's A "Vision"