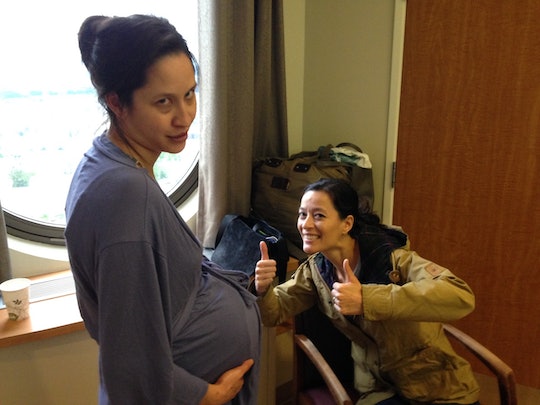 Not everyone is lucky enough to have a badass sister in their corner during their pregnancy. Some are only children, others have brothers (ew!), and let's face it, some sisters kind of suck. But for the fortunate, sisters play a key role in preparing for parenthood. For many women, a sister is the person who has known and will know them the longest. Whether that sister is biological or chosen family, there are certain things the best aunts do when their sister is having a baby.

My sister is my "person," but we weren't always the best of friends. Our childhood games tended toward the sinister (if anyone asks, you do not want to play "hostage.") As adolescents, we barely got along. Now that we're grown, though, we've realized that we're better together. With our powers combined, we're like one fully functioning person. All kidding aside, it really is a symbiotic relationship. So when I found out I was expecting, I had no doubt that my sister would be a central person to my pregnancy.

She didn't disappoint. From the second she discovered my pregnancy to the moment she held her niece in her arms in the hospital, she was a freaking rockstar. Like other sisters before her, she showed up for me in the best ways possible: