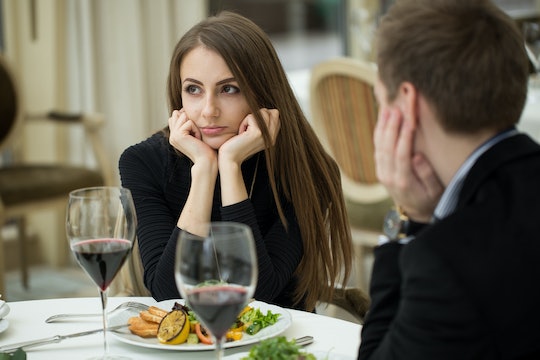 It's no secret that first dates can suck. But it wasn't until I went on a few first dates as a single mom that I learned just how bad they can suck. To make matters worse, when I first started dating after becoming a single mom, I had no idea what I was doing. So yeah, I made a few blunders, met more than a few creeps, and had so many awkward and embarrassing first date moments. So when I asked other single moms to reveal their most embarrassing first dates, I learned I was not alone. Solidarity.

I've found that you learn so many humiliating life lessons while dating as a single mom. The first being that people lack reading comprehension skills. On so many first dates, I was forced to awkwardly explain a ton of stuff I thought my date already knew, because it was on my online dating profile, including the fact that I was a single mom. It turns out that a lot of people have serious hang-ups about that. Then, for reasons entirely foreign to me, men would ask me questions about the state of my vagina and why I didn't look like I had been pregnant. One dude texted me asking for a "full body shot" before he'd commit to a date. I didn't reply. Then, there were the people who clearly lied about themselves, or their intentions, when we agreed to meet. Yeah, that single consultant from out of town who "wanted a relationship" was actually married with kids.

My most embarrassing single mom first date ended up being the one who didn't show, because "I had too much baggage." As much as I tried to finish my wine, not cry, and tell myself it was their loss, I was humiliated. When you are a busy single mom you don't have time, or the emotional wherewithal, to waste on dates that suck.

Fortunately, for me and other single moms out there, our time spent going on first dates may eventually come to a close. I ended up marrying the person I went on my last first date with. Until that happens, though, many single moms have to endure a few embarrassing first dates moments, like these ones: