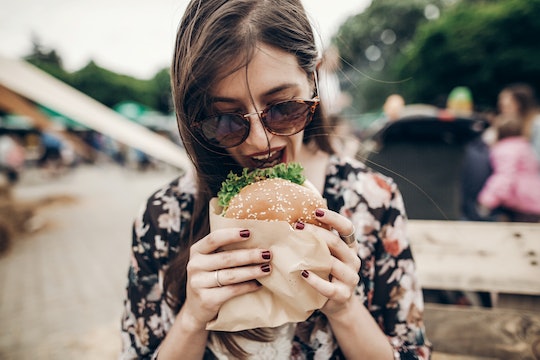 It's been nine years since my body grew another human and I still get tripped up on the weirdness of pregnancy. I think about going through life as a non-pregnant person (commuting to work, taking spin classes, brushing my teeth), while another human casually grows inside me. My pregnancy must be weird for others, too, as evidenced by the strange stuff people said to me. Most of it came from a good place, but some crossed the line. For example, there are just certain things you don’t get to say to me about my pregnancy cravings, for example. And don’t get me started about the comments regarding how high I was carrying. Those "observations" felt particularly intrusive, especially since I had spent decades, prior to experiencing pregnancy, dealing with body image issues.

What folks would say about my pregnancy cravings not only annoyed me, it fascinated me. I guess pregnancy is such a mystery — even to those who have experienced it firsthand — that remarking on an expectant mother’s diet is a way to try to understand the inner workings of the experience itself, and perhaps even how something as seemingly trivial as food can impact said experience. I understand the reasons why the deli counter guy asked me if I was sure I wanted onions on my sandwich (the heartburn factor could be high for us pregnant ladies), but I resented having my gastronomic autonomy called into question when I was just trying to eat. (Especially within earshot of a sizable lunch crowd.)

So bite your tongue the next time you’re tempted to comment on someone’s eating habits, especially if she’s pregnant, and definitely not before she’s eaten. My tolerance for even the most innocent questions about my choice in sandwich fillings (“But isn’t deli meat bad for the baby?”) was non-existent when I was hungry. With that in mind, here are some more things I couldn’t stand people saying about my pregnancy cravings: