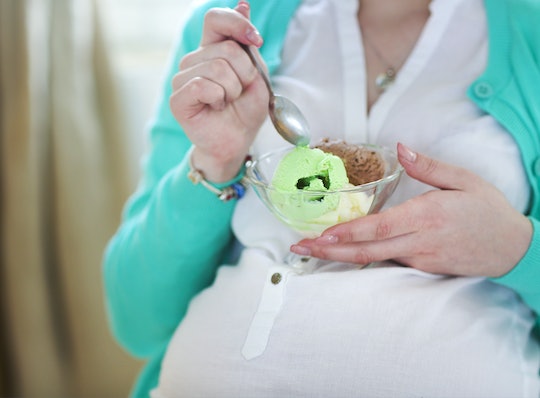 There’s a pretty tired trope in movies and television shows featuring pregnant women, and I'm sure you've seen it. A woman, probably in her final trimester, begs her husband to fetch her some pickles and ice cream. It’s like the standard “gross pregnancy craving” and yet I’ve rarely met a woman who actually had that particular craving. So what do pregnant people really crave? I asked a number of moms to share their grossest pregnancy craving, and their answers were very different than what I’d expected. While some were fairly simple and not entirely disgusting, others were definitely interesting combinations I would have never thought possible. (It’s also important to mention that what might be totally gross to one person might be delicious to others, so keep that in mind.)

During my pregnancy with my own son, I didn’t really have what you’d call a “gross” craving. I was one of those (not so) lucky ones who had an incredibly strong sense of smell, which translated into a number of food aversions. Anything that smelled even remotely strong made me queasy, though I rarely threw up (which, honestly, is worse than actually throwing up). I spent much of my first trimester eating extremely bland rice and beans, vegetable soup, and grilled cheese sandwiches. In other words, nothing too exciting to see here, folks.

In asking other moms about their experiences, it also seemed like many had more aversions than they did cravings. So, perhaps if you’re writing a story about a pregnant person, you’ll want to write more about them hitting the bathroom when they smell someone’s tuna sandwich than wanting to eat Cheetos dipped in cream or cheese or something. Food for thought. Now, on to those weird cravings:

More Like This
All Your Questions About Getting Pregnant After A Tummy Tuck Answered
What You Need To Know About Using Hair Removal Cream During Pregnancy
Ashley Graham On The “Fun, Organized Chaos” Of Raising Twins
These Stepmother's Day Instagram Captions Are Straight From The Heart