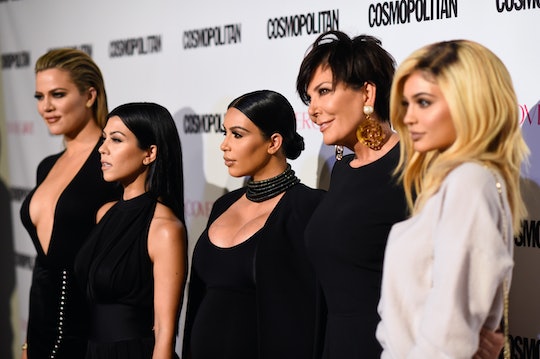 Here Are The Kardashians' Views On Breastfeeding

With so many of the Kardashian-Jenner sisters bringing babies into the world this year, fans are undoubtedly curious about their parenting habits. However, in a very un-Kardashian-Jenner fashion, the three sisters in question have each kept their pregnancies (and first few weeks of motherhood, for Kim and Kylie) on the quiet side. That being said, fans of the KarJenner tribe are likely wondering: Do the Kardashians breastfeed?

Kim Kardashian has openly spoken about breastfeeding her two older children, North and Saint, according to the Huffington Post. Kim was also the first of the sisters to have a baby this year, who she welcomed via surrogacy. The couple kept the identity of their surrogate private, although Kim did open up about her on several occasions. The couple welcomed their baby daughter Chicago West on Jan. 15. Kim has not disclosed whether she is breastfeeding Chicago — which, believe it or not, is totally possible for Kim to do even though Chicago was born via a surrogate. Earlier this year, Romper spoke with International Board Certified Lactation Consultant (IBCLC) Tania Archbold, who explained how the process of inducing lactation works.

There are two ways to induce lactation — by stimulating the breasts and nipples, or by using medication. Some parents use just one method, and some use both. If parents expecting a baby via surrogacy or adoption know they want to breastfeed their child, Archbold advises reaching out to an IBCLC to figure out a game plan as early as possible. “As always,” Archbold tells Romper, “each person's situation is very specific to their own health history, and some people will be able to induce a larger supply than others.”

Chatter about Kim possibly breastfeeding Chicago began to spread when she posted on Instagram about a nursing pillow called My Brest Friend earlier this year. "I literally get multiple of these, since you don't know what room you're going to feed in, you need them all over the house," she said at the time. "It's everything." And whether Kim decided to induce lactation, the pillow could definitely still come in handy for bottle feeding.

The youngest KarJenner sibling, Kylie, gave birth to her first baby, Stormi, on Feb. 1. The 20-year-old makeup mogul kept her pregnancy extremely private, waiting to confirm the rumors until after she'd actually given birth. She's also kept the first month of Stormi's life pretty private, only sharing a couple of updates. That being said, it's no surprise that Kylie has not disclosed whether she's breastfeeding.

As of now, the only other member of the KarJenner family scheduled to give birth this year is Khloé, who is expecting her first baby within the next two months or so. Like Kylie, Khloé kept her pregnancy under wraps for a while — but unlike Kylie, she announced her pregnancy several months before her due date. Since sharing the news, Khloé has opened up about pregnancy on social media multiple times. She has yet to share whether she plans to breastfeed, but since she's been pretty open about the latter half of her pregnancy thus far, it wouldn't be a surprise if she chooses to tell fans about her feeding plan.

Even though she's not one of the KarJenner siblings giving birth in 2018, Kourtney is perhaps the most experienced KarJenner mama, considering she has been a parent since 2009. She has three children: Mason, Penelope, and Reign. As it turns out, Kourtney is a huge fan of breastfeeding. In 2010, Kourtney wrote a blog post for People about breastfeeding her oldest child, Mason. As she explained in the post, she exclusively breastfed Mason until he was 6 months old, at which point she introduced some solid foods in conjunction with breast milk. "I love the bonding time, love that it’s natural and what your body is made to do, love the benefits for his body and mine," she wrote at the time. "I find it to be such an amazing womanly thing."

Kourtney wound up weaning Mason off breastfeeding when he was around 14 months old, according to E! News. According to mom.me, Kourt also breastfed Penelope for more than a year. And by the time Kourtney's youngest child Reign was born, she was super open about the process. She shared a "#brelfie" of herself pumping for Reign on Instagram on more than one occasion, helping to fight the stigma against public breastfeeding.

So whether or not Kylie and Khloé decide to breastfeed their babies, it's clear their sisters Kim and Kourtney will have plenty of advice for them.