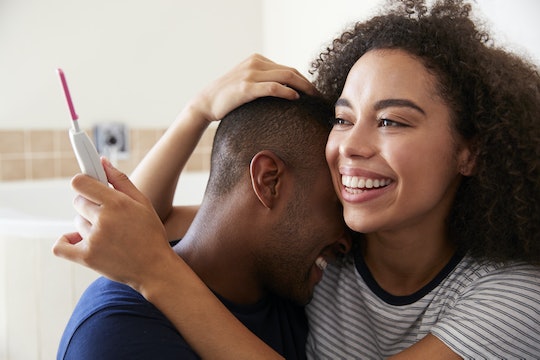 14 Moms Reveal The Moment They Realized They Were Pregnant

To my surprise, I knew I was pregnant before I held a positive pregnancy test in my hot little hands. My partner and I had been trying for only a few weeks, but I knew something was different. I went to the bathroom thinking my period had started, and when I realized it hadn't I took a pregnancy test. That test was negative, but I still felt "off." So, how long does it take to know you're pregnant? Every person is different, to be sure, but a few days later I took another pregnancy test and it was positive. So was the next one, and the next one, and the next 100 tests I took. And, of course, I wasn't surprised.

When I asked other moms to share the moment they knew they were expecting, I realized that knowing before you actually "know" is a pretty common experience. More than a few moms suspected they were pregnant before they sat down to pee on a stick. Between morning sickness, painful breasts, and an intensely powerful sense of smell there were some signs that screamed "pregnant" and long before these women realized they had missed a period. And for others, like me, they just felt "weird" and figured it was time to take a test.

Others didn't know they were pregnant until they were well into their first or second trimesters, which just highlights the fact that every pregnancy, and every body, is different. If I've said it before I'll say it again: when it comes to realizing your pregnant, your mileage may vary from practically knowing the moment you conceive, to not suspecting a thing until you feel your baby kick. So with that in mind, here are some real moms on finding out they were going to be moms: