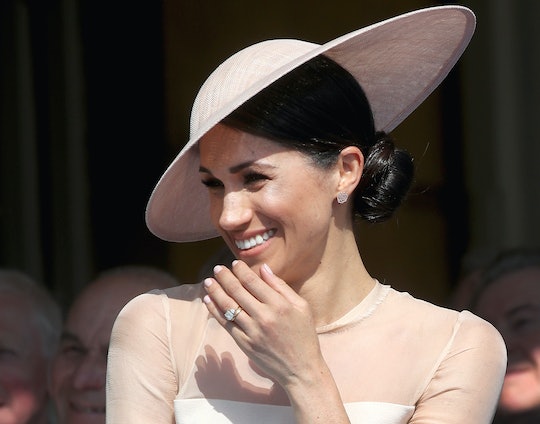 12 Of Meghan Markle's Most Memorable Moments From 2018

There’s no doubt that, as she wraps up 2018, the newest member of the royal family is counting her blessings. Looking back at Meghan Markle’s 2018 highlights it’s easy to see she had no less than an epic and incredible year.

From the wedding of the decade to a royal baby announcement, it’s been fun for everyone across the world to watch the former Suits star turn into a full-fledged royal, learning the ropes of state visits while maintaining some of the girl-next-door charm that makes her so lovable. Even at the most formal of events, there’s always the hope that she’s going to break out that giggle that’s just short of a full-fledged laugh, as if for just a moment she can’t even believe her own life.

While it’s true that 2018 was the year that Markle chose to give up her acting career, she gained so much in exchange as she traveled the world, visited charities, and even spent time traveling with Queen Elizabeth herself. And if this year was a whirlwind, she’d better hang on — with a baby on the way, 2019 is sure to be even more of a sprint.

But before we get there, let's have a look back at a few of the top moments of Markle’s first year as a royal.

The couple started out the year with work, making their first official joint visit to Scotland on Feb. 13. Oh, and while there, they were greeted by a Shetland pony named Cruachan, who is the mascot of Scotland’s Royal Regiment, according to The Telegraph.

When She Visited Birmingham To Mark International Women’s Day

In March of this year, Markle, along with her husband Prince Harry, celebrated International Women’s Day with a visit to Birmingham, according to People. There, they attended an event meant to inspire girls to consider the STEM fields for study.

On April 6, the couple attended the U.K. team trials for the Invictus Games, an event founded by Prince Harry that is near and dear to his heart, according to The Telegraph. There, they met with some of the participants and watched the trials taking place throughout the day.

Their May 2018 Royal Wedding

May 19 was the big day! The royal wedding was a highlight of the year for everyone as fans of both Markle and the royals watched this fairy tale come to life. Markle was radiant in her gown as she walked the aisle to her prince, and her mother, Doria Ragland, became an international celebrity overnight with her grace and poise.

When She Attended The Prince Of Wales' Patronage Celebration

Just a few days after the wedding, on May 22, Markle attended an event at Buckingham in honor of Prince Charles’ 70th birthday. It was the first time they stepped out together as a married couple and people took note of Markle’s relaxed and happy demeanor around the rest of the family. Oh, and there was also that moment of Markle bursting out into a fit of giggles as Prince Harry swatted away bee...

When She Attended The Trooping The Colour

All the royals were out of the balcony of the palace for Trooping the Colour on June 9, an event which marks the official birthday of the monarch. All eyes were on Markle though as the world watched her take her place as a full-fledged member of the royal family. And took note of her off-the-shoulder pink dress, which according to People, broke royal protocol.

When She Visited Cheshire With The Queen

On June 14, Markle had an opportunity that few people get: the chance to travel alone with the queen for an official event. The pair headed off to Cheshire for an overnight visit that included a night spent on the royal train, according to Country Living. Technically the train is only for senior royals like Prince Philip and Prince Charles, the magazine reported, so the invitation was truly an honor.

When She Visited The Hubb Community Kitchen

On Sept. 17, Markle took time to visit a community kitchen that supports women who were affected by the Grenfell Tower fire, according to The Independent. While there, she released her support for a charity cookbook, the proceeds of which will go to the kitchen.

Another big day for the couple happened on Oct. 15 as they announced to the world that they are expecting a baby. No details were released about the royal baby-to-be's sex or exact due date (other than the duchess is due in spring), but the world instantly started paying attention to Markle’s every move and reflecting on the protocols of royal pregnancies.

When They Arrived In Australia For A Royal Tour

Just one day after their big news, Markle and Prince Harry arrived in Australia to open the Invictus game and embark on a three country tour, according to USA Today. While there, they watched the games and visited a variety of charities, including one that fights the stigma against mental health issues.

On Nov. 13, the whole family came together to celebrate Prince Charles 70th birthday. A few photos were released showing the prince with his children and grandchildren, and, of course, Markle seemed to fit in perfectly as a member of the family.

When They Released Their First Christmas Card As A Married Couple

To wrap up this most spectacular year, the couple chose to share a private moment with the world. They released a Christmas card showing them alone, watching the fireworks at their wedding reception — a perfect juxtaposition of their remarkable lives and very private love.

More Like This
The Best Valentine’s Day TV Episodes For Kids
25 Sweet Movies Families Can Watch Together On Valentine’s Day
20 Songs About Love, Friendship, & Family To Listen To With Your Kids On Valentine's Day
Jessie James Decker's Husband Is Worried A Vasectomy Will Take Away His "Power"
What Parents Are Talking About — Delivered Straight To Your Inbox