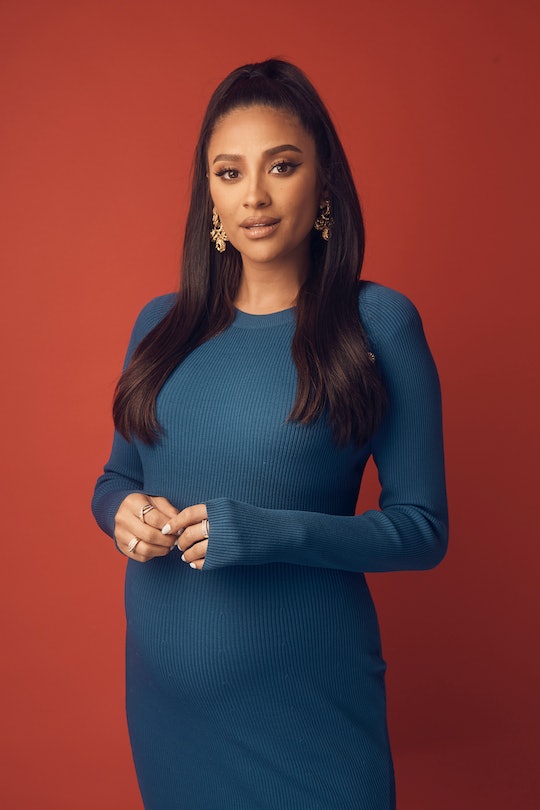 Shay Mitchell is, of course, a celebrity and recently became a first-time mom, which means she's dipped her toe into the dark world of mom-shamers. Now that she's welcomed her adorable little girl, everything she does will apparently be subjected to judgment by strangers. Don't worry, though, because Mitchell handled a recent mom-shamer criticizing her breastfeeding her daughter in a new photo like she was born to do it.

The Pretty Little Liars star welcomed her first child with boyfriend Matte Babel, daughter Atlas, in October. In the weeks since Atlas' birth, Mitchell has been sharing tidbits about her experiences as a new mom. Like her baby girl's first flight to visit her grandparents in Canada. And on Tuesday, Dec. 10, Mitchell shared a stunning photo of herself breastfeeding little Atlas. "Breast friends," she captioned the photo, which shows the new mom staring into the camera while her daughter nurses in her arms.

While most people loved the picture, there was, naturally, one person who decided to say something negative.

"I’m a fan of her, but this picture just says it’s an attention getter," a follower commented on Mitchell's photo. "She’s not even looking at the baby, she’s not connected with the baby she’s connected with camera."

Mitchell's response to the criticism that she's not looking at her baby? "I missed the part in the baby books that stated I had to maintain eye contact with my daughter while she feeds rather than capturing an amazing moment we were having."

I suspect the Dollface actress is going to be a difficult target for the mom-shamers to criticize, simply because she won't have it. She has already made a habit of being as open as possible during her pregnancy, like the time she admitted on her YouTube channel Almost Ready that she wore a diaper on set because she had to pee so often or sharing her labor and delivery video with followers on social media. She is all about transparency, so it seems like mom-shamers are going to have a tough time calling her out.