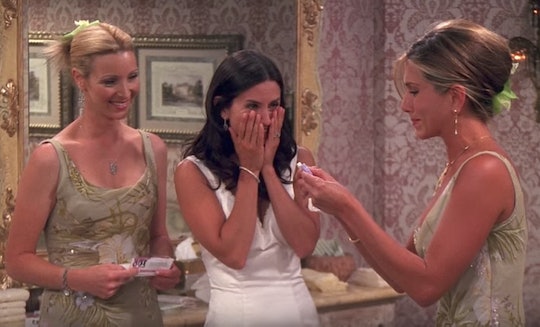 Twice in my life, I've experienced that moment where you pee on an overpriced piece of plastic and suddenly find yourself stuffed into your bathroom with every single big, existential question — and every single tiny, logistical question — you've ever had. Then a sh*t ton of extra questions you didn't even know you had until that moment hit you like an unforgiving bag of bricks and somehow even the word "question" starts to make less and less sense.

Of course, whatever comes immediately after finding out you're pregnant isn't the same for everyone. If you were trying to get pregnant, your thoughts and feelings in that moment are probably less complex than the aforementioned situation, even if they're no less intense. In fact you'll probably still get hit with more questions than you expected you would in that moment, because there's a big difference between wanting to get pregnant and holy sh*t there's actually fertilized cells inside of me multiplying as we speak.

But that wasn't the case for me. Both times I got pregnant, five years apart, wasn't the result of conscious effort with my partner. I mean, it obviously also wasn't the result of exceptionally careful prevention either, but I didn't say I was conducting myself with flawless rationality and responsibility — I just said I wasn't trying to bring a baby into my life. So when I found out there was science afoot in my uterus, I had a lot of questions.

If you've been pregnant, I don't have to tell you the questions — Can I do this? Do I want to do this? What about my career? What about money? Will my boobs ever stop hurting? — and they're kind of irrelevant to me at this point. I answered the questions and made my decisions. I had an abortion, and five years later, one extra-giant, extra-wonderful baby. And now, a decade out from the first positive pregnancy test, I feel exceedingly great about both choices.

But the best question — and the only one that I think has the potential to be broadly applicable to most newly pregnant women, no matter how they feel about the news and no matter who in their life is saying it to them — came from my sister. She's one year younger than me, is my best friend, and both times I got pregnant, she said the same perfect thing:

This question is simple, to be sure, but it's so brilliant and useful in so many sets of circumstances. For one, it's inherently neutral. The words "amazing," "awesome," and "oh my god" appear nowhere, which means there's no automatic conveyance of how the question-asker feels about the recipient's pregnancy news. Even the "wow," if said flatly, can have mutable meaning — is it a "this is incredible, life-changing news" wow, or is it a "this is a minor disaster but I'm here for you" wow? No one knows! That's the beauty of it.

This question is simple, to be sure, but it's so brilliant and useful in so many sets of circumstances.

It also allows for an endless list of potential answers. "Now what?" gives the pregnant person a chance to be the first to project an emotional response onto the situation. You'll know a lot about how someone feels about their new pregnancy — and thus, what kind of emotions you should reflect if you want to be as supportive as possible — by whether they respond to "what now?" with "we get celebratory ice cream and start the registry, obviously!" or "we panic" or "duh, we make an urgent call to Planned Parenthood and then drink tequila."

This particular question also moves everyone forward with the control in the right hands. When you find out you're pregnant, it can be easy to get a bit frozen in that moment of discovering the news. Time stops, you can't breathe, and all that fun stuff. This can stay true even as you're talking to people about it. When I was 20, I spent a full week debating the options with my then-boyfriend before I told my sister, and her asking me, "What now?" shook me out of my shocked atrophy more effectively than anything my boyfriend had said in the preceding week. It didn't take me nearly as long to tell her the second time I got pregnant (probably only hours), but the question was the same and so was its effect.

Because "what now?" is the simplest, gentlest reminder that something must come next. Forward movement from this moment must happen. More importantly, asking that of the newly pregnant woman effortlessly places all the power to decide what that movement looks like and what direction is goes in squarely in her hands and no one else's. It's not, "What are you guys going to do?" and it's not, 'What did he say when you told him?" — it's one person looking at one other person, asking that specific individual what comes next.

"What now?" is the simplest, gentlest reminder that something must come next. Forward movement from this moment must happen.

Even if you know beyond a doubt that the person you're asking definitely wants to stay pregnant and is likely thrilled, giving her that power to decide how these first moments of pregnancy play out — Does she want to wait to tell people? Does she want some herbal tea to chill out for a minute? What happens right now? — will jumpstart what will hopefully be the dynamic for the rest of her pregnancy: her deciding what needs to happen and everyone else around her following her lead.

It also doesn't hurt to assume that ice cream will be part of whatever happens immediately following pregnancy news.