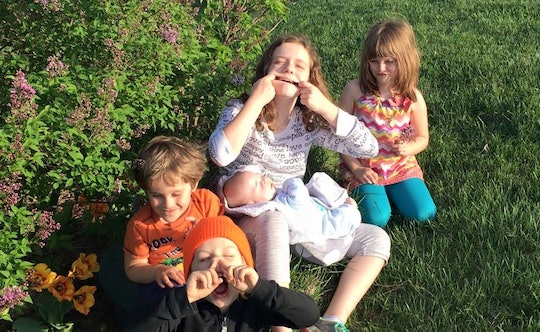 Last week when Joanna and Chip Gaines — stars of the HGTV show Fixer Upper — announced that they were expecting their fifth child, people on social media had things to say, and some of those things were mean. According to the internet, the Gaines' are personally responsible for the world's over-population, neglect their kids, and must be part of a religious cult. I didn't need to read the comments, though. As a parent to five kids under 12, I've heard them already. Yes, I have five kids. No, you didn't misread. But here's the thing: I've reached a point when I absolutely do not care what you think about it. I don't want, or need your opinion. Your philosophizing isn't necessary.

Maybe I'm too tired to care — or have used up all of my f*cks taking care of my many, many children — but honestly, I have stopped feeling hurt when people make a comment about the size of my beloved family. And for the most part, I'm just embarrassed... for them. You see, making comments about other people's families and personal choices is not OK. Full stop. And yes, that includes comments that express some misplaced sense of concern for a tired mother, her kids, or the population of the world at large. It's just, you know, gross. I've heard things like:

"The world is so overpopulated. How dare you bring another child to the world."

"Aren't you, like, too old to have another baby?"

"Don't you know how those things happen? The condom aisle is over there."

This subtle concern trolling of other people's choices, bodies, religious and social beliefs is sexist, misogynistic, and anti-choice. It's none of your business how I choose to use my reproductive parts, and I am so tired of hearing other people's opinions on a seemingly daily basis.

Now, is it OK to worry about a family that is struggling? Absolutely. Is it OK to worry about the environment, consumption of natural resources, and global climate change? Definitely. Is it OK to object to religious and cultural practices that limit a person's choices about when and whether to get pregnant and carry that pregnancy to term, or how many children they have? Sure. I know I do.

Those choices, though, were exclusive to my partner and I, and impossible to understand without the context of our lives, our family, and relationship.

All of these topics are completely OK to worry about, think about, or even vote or conduct activism around. I myself will fight until every person on the planet has access to reproductive health care, birth control, and abortion care. However, when it comes to an individual person's choices about their family planning, family size, or pregnancy? Well, it's simply none of my business, and none of yours, either. The comments need to stop, especially since they do nothing but make a woman feel shamed, judged, and alone.

I get the temptation to express your opinion about someone else's intimate choices. I, too, used to laugh at parents who let their offspring outnumber them. I care about population growth and women's reproductive freedom. I always planned on having two kids, so that's exactly what I did. But then, well, life happened. I got divorced, met a man with two kids, and we decided to have baby number five. While our family is loud and chaotic, and I sometimes dream about running off to Hawaii (or maybe just finishing a cup of coffee while it's still hot, or peeing by myself, or sleeping in on the weekends), most days, I wouldn't change a thing.

No one gets to question anyone else's reproductive choices.

Now that I'm here, with five kids ranging in age from infant to tween, I realize how personal these choices are. The path I've taken towards motherhood, and how I've built and grown my family, definitely didn't follow anyone else's plan, and didn't turn out as I expected. Those choices, though, were exclusive to my partner and I, and impossible to understand without the context of our lives, our family, and relationship. I know that other people don't get us, but they don't have to, because we get us.

When you have more than one or two children, people seem to think they have a right to comment about or question your reproductive choices. It used to sting to hear jokes about how I "clearly" have no idea how birth control works, or those unhelpful comments about me "having my hands full." I didn't appreciate hearing questions about whether or not I am a member of a religious group, as if people automatically assumed I was forced into having a family so large in size. When I was pregnant at 39, like Joanna Gaines, I heard so many comments about my age, my health, and how old I would be when my baby graduates from high school.

And to make things even more awkward, at least once a week someone will find out how many kids we have and smugly glance up and down my body and at my stomach, sometimes choosing to say out loud, "You don't look like you've had five kids." That's just what I need: judgment with a side of objectification. My family is fine. My body is fine. I don't need your judgement, jokes, or stares.

The last thing I need is for a stranger to openly comment about how I apparently neglect our kids or how they shouldn't have been born.

I've also learned that when you have a large family, they have to be well-behaved at all times, otherwise some wise ass will let you know "you deserve what you get" or — my least favorite comment ever — "you should have kept your legs closed." Those are my children you are talking about. Let that sink in. They are children. Yes, sometimes they misbehave, because that's what kids do. It's normal. Sometimes it's hard to keep everything and everyone in order. It's been a learning adventure full of chaos and the occasional misstep. The last thing I need is for a stranger to openly comment about how I apparently neglect our kids or how they shouldn't have been born. It's horrible.

On People's Facebook post about Joanna Gaines' pregnancy, one commenter asked: "When will they stop breeding?" I'm happy to respond on her behalf. So, dear commenter with an inquiring mind, here's your answer: when they are ready, because it's none of your damn business.

No one gets to question anyone else's reproductive choices. Whether I have no kids or 10 kids; whether they were intended or unintended pregnancies; whether I am single, married, or dating 100 people simultaneously, it's no one's business. It doesn't matter if I am 17 or 45, it's none of your business and it's certainly not a joke. So, the next time you see a large family, instead of asking, "Are they all yours?" or saying, "Wow, you've got your hands full," how about asking, "Can I help?" Then again, you can always just try saying nothing at all.