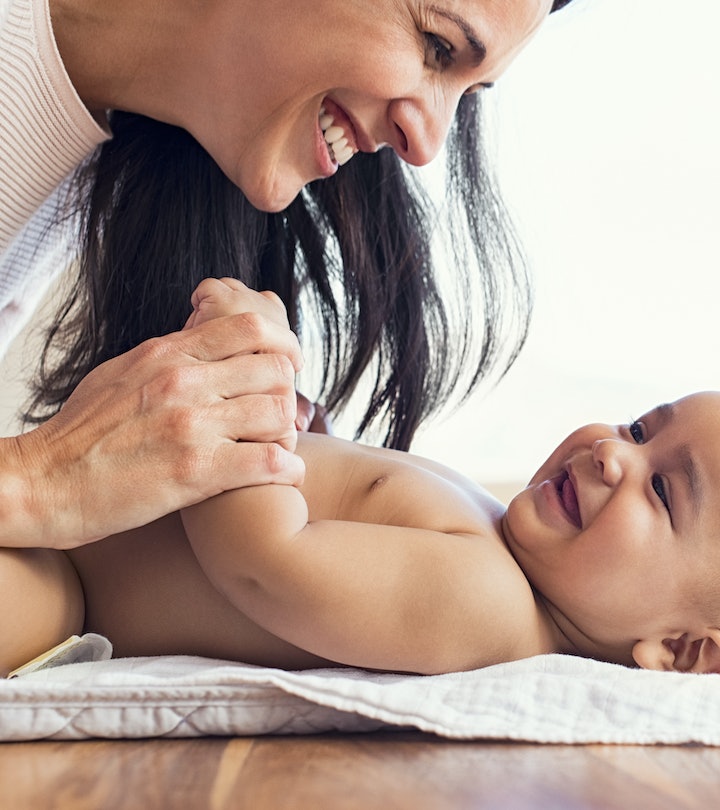 Here's When & How Babies Decide Which Parent Is Their Favorite

It happens sooner than you think.

Admit it — you definitely hate it when your partner is your baby’s favorite parent. Or maaaaybe you love it because you get a little bit of a break. Whether it works for you or drives you nuts, you may wonder when babies start preferring mom to others? Or, when do they make the switch and decide their other parent is the favorite? As it turns out, babies usually start with mom in the top spot, then consider others as they get older.

“At birth, babies can see approximately 8 to 12 inches in front of them. Over the first month of life, they quickly learn to prefer faces to other sights. It likely varies from a few days to up to 2 months old for newborns to recognize familiar faces. They do show a preference for family faces to stranger faces at 7 months old,” she says.

And babies tend to prefer mama early on for fairly obvious reasons — hers is the voice they’re most accustomed to. But there are other reasons, too. Babies’ senses of smell and hearing develop sooner than sight, and they tend to rely on those to recognize loved ones.

“Most babies develop a preference for their mother within 2 to 4 months of age. From birth, the combination of sight, smell, and sound likely all help babies distinguish their mother from others. Breastfeeding is the perfect distance between mom’s eyes and baby’s eyes, and babies like to look at their mother’s face while they breastfeed,” Bragg says. "Then there’s clearly smell, and the sound of their mother’s voice, which they’ve been listening to the entire time they were in the womb.”

When do babies start preferring other caregivers over mom?

Your baby’s attention may start to wander to your partner and other close family members or caretakers as they get older, can fully identify the people around them, and begin to socialize.

“The preference may not necessarily be for the infant’s mother, but whomever is the primary caretaker for the infant — for instance, it could be the father if the baby is primarily bottle fed,” says Alyssa Kuban, M.D., pediatrician at Texas Children’s Pediatrics – Cypress, in an interview with Romper. “The preference for the primary caretaker of the infant starts between 6 and 9 months of life. This is when separation anxiety starts for children as part of their normal development.”

“During the first few months of life, infants start to socially interact. Mothers are commonly their most frequent interaction during this time and they subsequently form a primary attachment to them,” says Bragg. “That said, babies bond to the individual who responds most frequently to their social cues such as crying or smiling, and that may not always be the mother.”

How can parents who aren’t favored bond with their baby?

If you or your partner notice that your baby has a major preference for the other parent (or you’re trying to secretly become the favorite), there are ways to win some favor from your tiny tike. By answering their cues and being engaged with them, they learn to seek you out, too.

“The most common factor playing into whom the infant shows a preference for is who is feeding the infant the most,” Kuban explains. “However, as the child is able to sit up and play more, this preference can change. Spending actively engaged time playing with your infant is not only important for their development, but also for bonding with their parents. The best way to help a parent bond more with the baby is play, but this play must be the parent actively engaging the baby. For example, at 9 months of life, have a parent build a tower of three blocks and have the baby knock it over; they can both laugh at this cause-and-effect situation and do it again.”

And even if you’re not the favorite for right now, know that your baby’s attachment to your family is important for their long-term development. They key to a strong bond is loving your baby and engaging with them fully. As long as you keep that up, you’ll at least always be in the running for number one in their heart.

“I think that the most important thing for parents to remember is that a child who learns to make healthy attachments as a baby is more likely to have long-lasting relationships as an adult,” says Bragg. “The key to forming strong bonds with your child is to enjoy the time you spend with them, engaging them as often as possible, and responding to their cues to reinforce that important parental bond. Acknowledging that parental preferences will most likely shift multiple times and in different situations is also key to not taking it to heart if a child prefers one parent over another.”

More Like This
Abbot's Formula-Producing Plant Can Reopen In As Early As 2 Weeks — Now What?
Here's When Your Baby Might Start Sleeping Through The Night For Real
These Darling Baby Boy Names All Start With The Letter "D"
17 Perfect Insta Captions For When Baby Says "Mama" For The First Time

This article was originally published on Jan. 22, 2020