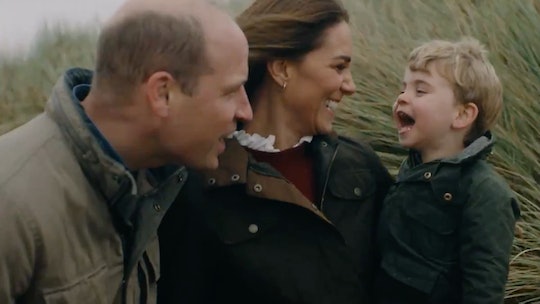 All The Adorable Ways Prince Louis Is A *Classic* Third Child

The little royal ticks every box.

The Duke and Duchess of Cambridge will be celebrating the fourth birthday of their youngest child, Prince Louis, on April 23, along with their 8-year-old son Prince George and 6-year-old daughter Princess Charlotte. While the older two Cambridge kids have been seen out and about with their parents for royal events recently, little Prince Louis has not been around. Perhaps because he is simply too young to attend. Or perhaps because, as the absolute most classic of third children, they simply know better than to bring him. Indeed, here are all the adorable ways Prince Louis is a prime example of a third, youngest child.

Prince Louis’ arrival on April 23, 2018 saw the entire dynamic of his family change. Before his birth, they were a matched set. William the dad, Kate the mom, George the seemingly serious son, and Charlotte the precocious daughter. Then came Prince Louis, who made it clear right out of the gate that he was going to fulfill his role as classic youngest child perfectly. Charming, outgoing, full of fun, creative... his little personality shone through from moment one. In the four years since, he’s been keeping his parents wildly entertained... and on their toes.

As the youngest of three children, Prince Louis has found his niche as a very loving, cuddly little boy. Just take one look at the joy on Prince Charles’ face as he is wrapped up in a big hug from his grandson in 2020. While it is certain that his other grandchildren give him hugs as well, there’s something about his third grandchild that clearly softens him up.

In 2019, Prince Louis joined his mom on the sidelines of his dad’s polo game and stole the show. He was putting on her sunglasses, making silly faces, and generally keeping her entertained to the point where she barely seemed to look at the actual event she was attending. Such is the life of a third child.

When Prince Louis turned 3 years old in 2020, Middleton took a photo of him doing some finger painting in an adorable “Instagram vs. Reality” moment. He was obviously having the time of his life and very unconcerned about any mess he might be making. Classic.

Youngest children sometimes tend to be a bit more comfortable with taking risks, perhaps because they know they have a legion of people to help them if they get into trouble. This could explain why Middleton talked about her son being super fast on his scooter, and was even seen chasing him down outside Buckingham Palace.

6. He’s good at getting people to do what he wants.

When Prince George and Princess Charlotte joined their parents at Easter Sunday services in Windsor, Prince Louis was too busy to be with them. Video footage shared by the Daily Mail shows him launching himself out of Windsor Castle and getting his mom Kate Middleton to move baggage around the trunk of the car so he could climb in through the back. Much like so many youngest children, Prince Louis is learning how to get people to do his bidding for him.

7. Basking in all that attention.

Unlike his reserved older brother and cheeky older sister, Prince Louis totally basks in all of the affection he gets. Take, for instance, his first appearance on the balcony of Buckingham Palace for the Trooping The Colour in 2019. He was not daunted by the massive crowds; instead, he threw his arms wide and waved at everyone. Unconcerned with life like a typical baby of the family.

A 2017 study by Brigham Young University found that the youngest child tends to be their parents’ favorite. And while no one would say that either Middleton or Prince William had a favorite, he certainly seems to bring out the best in both his parents. Whether his mom is talking fondly of her “little Louis” being her shadow and following her everywhere or his dad crouching down for big kisses from him, he’s a well-loved little boy.

Youngest kids know how to get and keep their parents’ attention; by being funny. Entertaining. Keep them laughing and keep them guessing. Just watch this tenth wedding anniversary video featuring Prince Louis at once leaving his parents laughing while also confusing his dad Prince William and you’ll see. He knows how to hold that floor.

Being the youngest also means Prince Louis has the ability to pay close attention to the goings-on in his household. Especially his mom. Middleton told Mary Berry from The Great British Bake-Off that Prince Louis’ first word was “Mary” because he knew her from her cookbook. Because he pays attention to what his mom is up to.

So if ever we hope to have a royal tell-all, it seems Prince Louis would be a shoe-in. Except, of course, he would never do it. Youngest kids don’t play it like that.