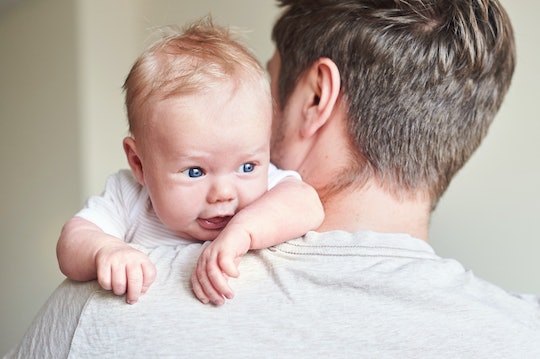 There are so many magical moments you get to experience when you have a newborn. Then nighttime rolls around, and suddenly things aren't so magical. Personally, my partner and I have engaged in way too many arguments over whose turn it was to get the baby when baby woke up screaming in the middle of the night. We were both worn out as new parents, but as the mother I felt like I deserved a break. So, yes, there are things a mom really means when she tells her partner, "It's your turn," and as the partner of an over-worked, sleep-deprived, potentially-still-healing-from-the-trauma-of-childbirth new mom, it's your job to learn how to read between the lines.

My partner has a very demanding job, for which he had to wake up early and commute to when he had our firstborn. We had agreed ahead of time that I would be the primary caregiver of the baby at night, when the baby arrived. I figured that I could handle two to three wake-ups a night to nurse for 20 minutes or so, and then sing the baby a little song back to sleep. But that was before the actual, living, breathing, never-sleeping baby came into our lives. Our baby wasn't the baby that I had expected him to be from my limited exposure to sleeping, cooing, agreeable babies that I had visited at other people's houses or had passed along on the sidewalk. My baby wailed for most of his waking hours, and even looked unhappy in his sleep. Sleep, for the most part, was touch and go.

My partner adjusted to this new paradigm when the baby arrived, and shared the caregiving responsibilities at night because, well, obviously. But since I had been dealing with a horror show of newborn life during the day while my partner was at work, I was even more depleted come night time. When it was my turn to get the baby, I just plain couldn't. I wanted to pass the buck. So when I told my partner it was his turn,I was lying most of the time, but that's because I was actually trying to communicate some other things, including the following: