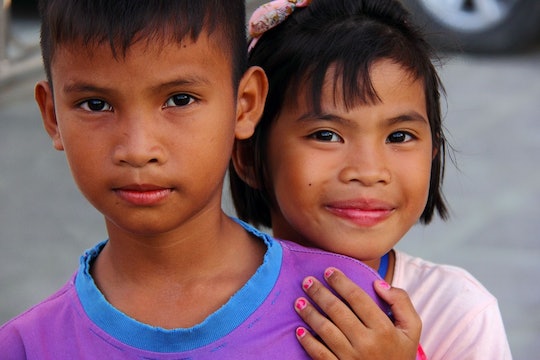 What Sons Shouldn't Hear In Front Of Daughters

One of my favorite folksy idioms is "little pitchers have big ears." For those of you unfamiliar with the saying, it basically means "be careful what you say around children: they're always listening." (Just ask my partner, who worked for months trying to get our toddler to say "Thank you" but discovered that one "Goddamnit" had our little one swearing constantly.) But this concept goes beyond cursing: in fact, parents would do well to consider everything their child is hearing. As such, there are things you should never say to your daughters in front of your sons. Even if you don't intend for them to hear you, they will, and they will learn to internalize the meaning behind your words.

I'm grateful for the fact that a lot of writers (at least in my world, it seems) are writing more and more about something I've noticed in raising a son and a daughter: sexism hurts everyone. Make no mistake, between women and men, women and girls are the more numerous and extreme of the Patriarchy's casualties. But when it comes down to it, what sexism ultimately does is create a more narrow, restrictive, compartmentalized world for everyone, gender identity be damned. Now, for men, those restrictions are often designed to funnel them towards different versions of success (your chances are better, of course, when said men start out life wealthy, white, straight, cis, etc.) but it comes at a cost. Like women and girls, they are told their success and social acceptance is reliant upon their perpetuating very particular behaviors and beliefs, which have often been imprinted on them from the time they're born. How they actually feel, of course, is immaterial.

The following ideas and phrases are ones, I would argue, are harmful to everyone involved — the daughters who are hearing them directly, and the sons who are absorbing what you're hearing nevertheless — by perpetuating sexist ideas about how men and women behave and should interact with one another.