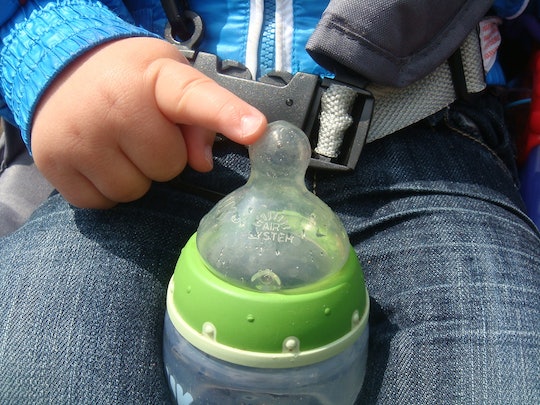 13 Necessary Mantras For Women Who Tried To Breastfeed, But Couldn't

Breastfeeding isn’t easy for everyone. Back when I was pregnant with my son, I was reading books and websites about how to raise a child the most "natural" way possible. That entailed, among other things, using cloth diapers, avoiding the mainstream baby products (shampoos, soaps, etc.), and breastfeeding exclusively for the first six months. Little did I know that my son’s birth would be incredibly complicated, and that breastfeeding would be a tremendous challenge. I would have benefitted from these mantras for women who couldn’t breastfeed, mantras that can keep you feeling grounded and OK and capable and empowered, when you might otherwise feel helpless and broken.

There are many reasons why some mothers can’t breastfeed. If you’re unable to breastfeed right away, for example, it might complicate the initial let-down process. My son was placed in the NICU immediately after birth and, as a result, I was unable to begin breastfeeding until he was about a week old. Even then, I hadn’t pumped enough and my milk all but disappeared about as quickly as it had arrived. Other moms can’t breastfeed due to the triggering nature the act of breastfeed can elicit, which may remind them of previous sexual assault trauma. Other women have hypoplasia or insufficient glandular tissue; which I was later told by a lactation consultant I may have. This means I (and others) are physically incapable of producing enough milk to keep our babies full and healthy. As a mother that spent the better part of her pregnancy looking for ways to "naturally" raise her child, you can't imagine what a blow it was to hear that my body couldn't do what I wanted and needed it to.

Like many others, I know what it’s like to desperately want to breastfeed your child and simply be unable to. If you’re finding yourself in this situation, use these mantras to get you by. Most important, know that there's nothing "wrong" or "unnatural" about you. Not. At. All.