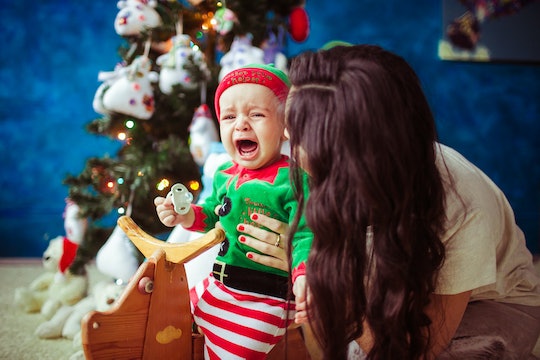 If you choose to tell your kids about Santa Claus, like I did, you pretty much have to expect that eventually they'll figure out the truth. Someone will let the cat out of the proverbial bag, or worse, you'll accidentally ruin the illusion. I've had so many near misses, embarrassing moments, and parenting fails involving Santa, that I almost regret telling my kids about him in the first place. I asked other parents to share their worst Santa-related disasters and, well, it turns out I'm not alone.

Honestly, I'm comforted by the numerous stories of children coming across evidence of Santa being a lie, like in the Christmas classic I Saw Mommy Kissing Santa Claus. In a way, it reminds me that I really don't have to feel all that horrible about accidentally leaving stocking stuffers visible in the trunk of my car. My daughter asked, "Who are those toys for?" and I could only tell her, "Well, for you." Then I had to return to the store on Christmas Eve to get more presents so my secret would be safe. I've gotten caught eating Christmas cookies from the plate clearly marked for Santa, too, and was forced to apologize to my then 4-year-old, distraught child.

Then there are the stories of scary Santa encounters and mall meltdowns that every parent regrets. My worst Santa moment was when my son asked the Santa at a community event why he didn't have a nice long beard or big belly, like the Santa at the Mall. I was mortified. And it seems a lot of us parents have experienced Santa-related disasters. Parenting is hard, especially when you try (and often fail) to meet your kids' holiday expectations. It's a good thing most of us have a sense of humor when things go wrong, and are willing to share our cautionary tales and epic fails so you can avoid making the same mistakes.