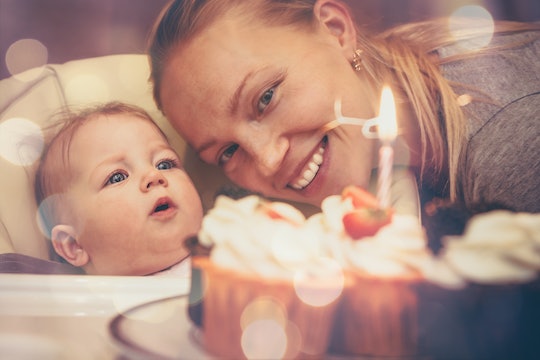 I've found that if you ask a mom what her first year of parenthood was like, she will look at you and chuckle to herself before sharing her story (or she'll just end it at the chuckle and let you draw your own conclusions.) That laugh is part defense mechanism, part retrospect, and part earned sympathy for her past self. I asked a group of my mom friends how they got through their first year of motherhood and, while I asked online, I could almost hear their answers prefaced with that rueful "Ha."

In many ways I knew I had it easy when I had my son. After all, he was healthy, he didn't have reflux or colic, and I could usually soothe him. You know, eventually. That's not to say that it wasn't hard as hell, though. In fact, I went to bed every day completely exhausted. But it wasn't until my second child was born that I realized just how difficult an infant my first had been. My partner and I joke that if our easy-going second child had been born first we would have thought our son was possessed. Since we had nothing to compare him to, though, we just assumed his more challenging behaviors were normal. Ha.

I got through most of that first year of motherhood by rolling with the punches and being as kind to myself as possible. Here's how some other moms were able to muddle through:

More Like This
Reddit Applauds Mom Of Five Who Stood Her Ground & Left Sleeping Dad Behind
21 Back-To-School Instagram Captions For All The Feels
Dr. Jill Biden Just Delivered Some Frank, But Powerful, Advice On Motherhood
12 Helpful Tips For Hiking With Kids