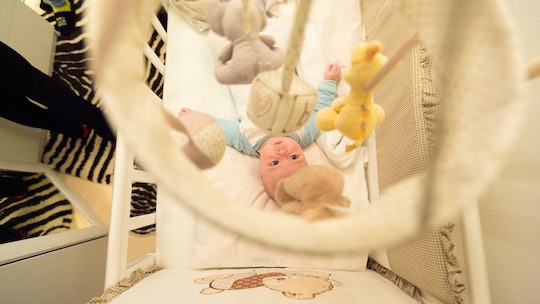 How Sleep Training Saved My Marriage

Sleep training is something my husband and I decided on long before we had kids. It's actually something we decided would absolutely have to happen when we became parents after watching a few close family members get zero sleep for years on end. It terrified us. They managed to mostly cope in the day-to-day, but we knew there was no way we'd survive it. Now that we are parents, I'm absolutely positive sleep training saved my marriage time and time again.

In fact, every night I think it saves my marriage. I often think about the alternative: one of us battling with our daughter, pleading with her to go to sleep or lying with her until she won't wake up when we get up, while the other one paces in an adjacent room or waits their turn. I'm grateful that we figured out, and early on, that no matter how much shushing and patting and consoling we did, our daughter would fall asleep better on her own. Not every baby is like that, and perhaps our next baby won't prefer to fall asleep on her own, but for now we're taking it as a total win for our marriage that our daughter responded so well to sleep training.

We worked with our daughter a lot to ensure that crying it out was minimal. We watched for sleep cues and totally played detective, trying to figure out how to help her fall asleep on her own. Before long, we learned that she needed to be swaddled in order to stay asleep at night, but she was super tactile and liked to have something just close enough to rub against her cheek to fall asleep. We made sure she wasn't going to suffocate while simultaneously putting a little blankie next to her, then encouraged her to work it out on her own. A few nights of light whimpering later, she was babbling herself to sleep and, well, we haven't looked back.