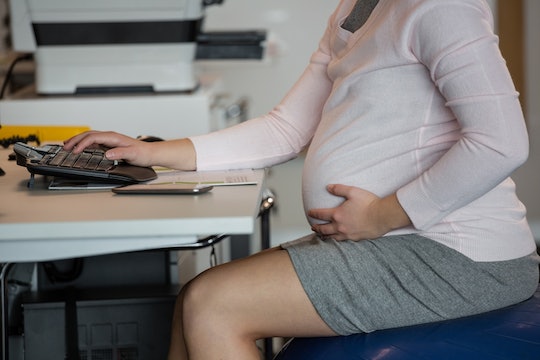 Pregnancy is supposed to be this incredible, magical time in your life. Here you are, a single human, suddenly growing another human inside your very own body! Unfortunately, our society doesn’t always understand the beauty and importance of this special time in a person’s life. Employers, for example, aren’t always the most understanding people when it comes to pregnancy. How do I know? Well, I was fired twice for being pregnant. While both employers claimed the the reasons for my terminations had nothing to do with my pregnancies, I know what it was really about. I know what pregnancy discrimination looks and feels like. And, as a result of what I've endured, I will never stand for this kind of treatment again.

The first time I was let go for being pregnant was in 2012. My then-boyfriend, now-husband, and I were in something of a whirlwind romance, and within a few months of our relationship I found out I was pregnant. We were both working at a co-working space in downtown Miami, Florida and were nervous about telling our employer (a severe narcissist who believed it was completely OK to shout and belittle employees and talk sexually about women who visited the office), so we did our best to keep things quiet. I was fairly fatigued and often nauseous during my first trimester, but I held my own. I’d been late to work a few times (and by "late" I mean no more than 5 minutes), so HR had me sign a document stating that I was on probation as a result of my tardiness. But I know tardiness is not the real reason why I was fired.

One day, about seven weeks into my pregnancy, my boss asked me to drive across town to a Costco to pick up office supplies. I did what was requested, but on my way back to the office I noticed that I was bleeding. I called my boyfriend in a panic, who did his best to cover for me at the office. He told my boss I had a nondescript emergency, I dropped off the supplies, and together we left work early to take me to the nearest emergency room. I was experiencing what the doctors called a “threatened abortion,” which is just a term for when you’re unexpectedly bleeding during pregnancy without actually miscarrying. The doctors performed an ultrasound and said everything was fine, and I went back to work the next day.

We decided to come clean about the pregnancy upon our return. Honestly, I didn't want my boss to think I was flaking out on my job over nothing. The HR department told both me and my then-boyfriend that everything was just fine, congratulated us, and said they would be very supportive and work with me to make sure there was someone on back-up whenever I had doctor’s appointments or there was another medical emergency.

Instead of being encouraged to seek the medical treatment I needed, I was told there was no one around to cover my shift. I sat there, in my office, terrified that I was losing my baby.

A few weeks later I started bleeding again while I was in the office. The other client services representative was gone for the day, and though they had promised to hire someone part time, they hadn’t. The HR representative was gone, so I told the woman filling in that I needed to leave to the hospital. Instead of being encouraged to seek the medical treatment I needed, I was told there was no one around to cover my shift. I sat there, in my office, terrified that I was losing my baby. I called my boyfriend, who contacted our boss (the CEO) and told him we needed to go to the hospital. Eventually the CEO relented and said we should do whatever we needed to (never stepping out of his office to check on his employees, mind you, and with little sympathy). We left,and another employee stepped in to attend to the front-desk duties. After a few hours in the emergency room I was diagnosed, again, with a threatened abortion. I was told everything would likely be OK, though, and that I should take a couple days off work.

I emailed HR that night and told the appropriate people that my doctor said I needed to be out a couple of days, hoping the powers that be would understand. I received no response. I was to return Friday morning for my shift, but on Thursday night I received an email stating that I was being let go due to my frequent tardiness as per the document I’d signed months prior. The issue? Well, I hadn’t been tardy in weeks. Instead, I left my post for an afternoon in order to make sure I wasn’t having a miscarriage. And they fired me.

A few months later, I ended up giving birth to my baby prematurely and losing her hours later.

I thought about suing but, at the time, I was focused on making sure my partner didn't get fired, too. It was hard knowing we were down to one steady source of income, and that my chance of acquiring any maternity leave (even if it was going to be unpaid) was gone. It was even harder knowing I could no longer see my OB-GYN because they’d canceled my insurance and, as a result, I would need to go on medicaid. The additional financial burdens now rested solely on my boyfriend, and the stress of that burden was insurmountable. Additionally, I worried that even if I were to apply for another job I wouldn’t get it because I was pregnant. A few months later, I ended up giving birth to my baby prematurely and losing her hours later.

The following year my boyfriend became my husband, I was working full-time as an editor, and I was pregnant again. I’d been in the office five months prior to that positive pregnancy test, and I was kicking ass. I’d gone from assistant editor to editor in a short amount time, and received frequent praise from my bosses. I did my best to keep my pregnancy hidden, though, because I was terrified of a repeat situation. I planned my doctor’s appointments so they were on my lunch breaks, so I would miss a minimal amount of work and no one would notice. But, eventually, people started to suspect something was up and I set up a meeting with my bosses to chat about my pregnancy. Like the HR person from my previous job, they told me they would be supportive and accommodating, and that I would have a job waiting for me when I got back from maternity leave, which they suggested I keep at around one to two months rather than the full three. I was also told my maternity leave would be unpaid.

Then the work started piling on. I took a short vacation I had cleared prior with my superiors prior to announcing my pregnancy and, on the trip, got sick and had to extend my trip by a day. My superiors said it was fine, but once I returned they continued to pile on the work, and at a rate that wasn't typical. Then, one day during a scheduled meeting, I had to excuse myself to go to a previously scheduled doctor's appointment. My portion of the meeting was over, the meeting had ran long, so I simply said I had to leave, and left.

The next day another “meeting” was called with just me, the COO, and the CEO. This time the doors closed behind everyone, and I was essentially chewed out. My bosses told me I was irresponsible and that they had “taken a chance” on me, but I was clearly not acting appropriately. All because I left the previous meeting early. I explained that I had already made it clear to HR that I had a doctor's appointment, and that I had acquired permission to leave. Still, I was continually insulted, and told that I could go work fast food if I couldn’t handle the pressure. I told everyone in the room that I would do my best, wiped the tears from my face, and returned to my desk.

The next morning, as I sat at my desk, he walked over and told me I was fired.

A few weeks later, my OB-GYN told me I should consider working remote a few days a week. My cervix was continuously shortening and she thought it might have to do with my long commute and substantial work hours. I needed to rest. As a result of her medical opinion, and because other coworkers worked remotely and all our work was done on computers, I requested to work from home a few days a week. I told the powers that be that I would always come in for meetings, of course, and that it was just for a short period of time. The COO said he’d have to clear it with the CEO, and I told him that this accommodation was essential, otherwise I wasn’t sure I would be able to stay with the company if my or my baby’s life were at risk. He said he understood.

The next morning, as I sat at my desk, he walked over and told me I was fired.

I was stunned. I asked if I could speak with the CEO but he said there was nothing to talk about. The COO sent a person from HR over to my desk to stand next to me and escort me out. Because I wasn’t moving fast enough, the COO himself came and stood by me, too, then walked me to the door while telling me I was not allowed to talk to any of my coworkers. He then had me walk across the street away from the property. I had no idea what was going on. Why was I suddenly being treated like a criminal? Why was there so much animosity? After months of staying late and taking short lunches and meeting deadlines, I was embarrassed, insulted, and belittled.

My story is not the first of its kind, and it won't be the last until something substantial changes and we hold those in positions of power accountable for their unfair treatment of pregnant women.

Just like my previous job, the environment had gone from welcoming and supportive to aggressive and abusive. I was happy to put it all behind me, but I was also angry that this happened. Again. I'm still angry when I think that this has likely happened to countless women over, and over, and over again.

According to the National Partnership for Women & Families, 31,000 charges of pregnancy discrimination were filed with the U.S. Equal Employment Opportunity Commission (EEOC) and state-level fair employment practice agencies between October 2010 and September 2015. And according to CNN, beyond the 31,000 pregnancy discrimination charges, a "far larger number of women were denied requests for simple accommodations such as more frequent breaks, time off for prenatal visits, or less physically demanding duties." My story is not the first of its kind, and it won't be the last until something substantial changes and we hold those in positions of power accountable for their unfair treatment of pregnant women.