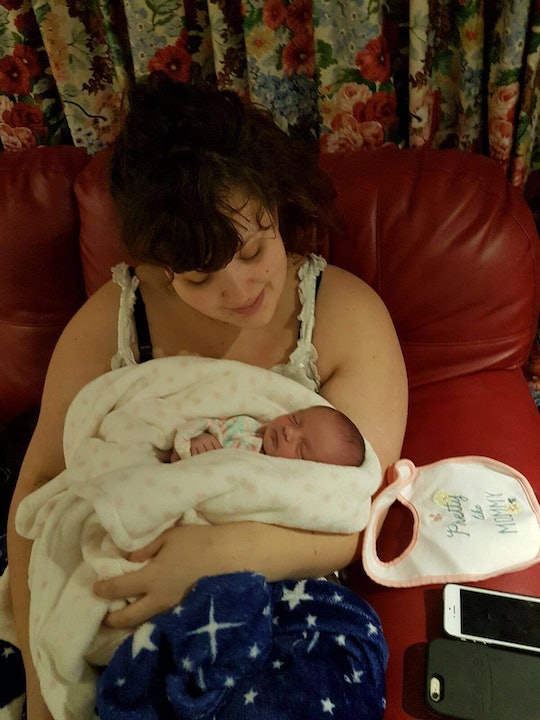 Why I'm Not Raising My Daughter In Trump's America

That Donald Trump would become president of the United States does not surprise me. I grew up in a small New Jersey town where racism, sexism, homophobia, classism, and xenophobia brewed beneath the surface of most people's prim demeanor (even if the folks in question would never, ever apply such labels onto themselves). My white-passing (and maybe even straight-passing) privilege allotted me certain comforts and safety nets that I'd begin to see unravel should anyone meet my Colombian mother and pick up on her thick accent. Wait, Marie's Hispanic? I could feel them think, the weight of my heritage slapping them in the face as though I'd hurt them; disappointed them. A few weeks later, I'd be down a friend or two. And things were far worse for the few black and queer-presenting kids at school. Not to mention the one Muslim family.

Lacey, the town where I'm from, is about 94 percent white, and in the 2016 election, an overwhelming majority of residents (70.1 percent) voted in favor of the Republican candidate. According to NJ.com, Lacey's voting trends reflect national voting trends. Meaning, a whole heap of individuals who might not consider themselves prejudicial or discriminatory towards marginalized communities (but kind of, probably, definitely are) voted Trump because they wanted "change." The kind of change that meant overlooking the now-president's words on women or minorities or his penchant for inciting violence.

Around Aug. 2016, I became increasingly more convinced that Trump would get in. Every time I'd leave New York City, where I was living at the time, to visit relatives in neighboring states, the hand-painted billboards, truck exteriors, lawn signs, and "Trump that b*tch" hats would greet me. That the fear of immigrants lives more rampantly in the hearts of so many citizens than the fear of women not having control over their bodies or of transgender people being killed became more and more clear. A month later, I unexpectedly found out I was expecting a little girl and the desire to run and run fast became inescapable. I didn't know with absolute certainty that he'd get in. But 25 years of living in America made it seem like the most logical outcome.

With the exception of a few progressive coastal bubbles here and there, almost everywhere I've been to in the States (though there's still some of the country I've yet explored) has felt oppressive and repressed in some way. For years, anti-PC culture humans have been preaching that liberals make this sh*t up. That things aren't really that bad at all. "Sure, racism exists. But you're blowing it way out of proportion." "Sure, sexism is there, sometimes. But this thing about the wage gap is completely contrived!"

The idea of raising a daughter (a daughter with Colombian in her) in the United States right now? Not so appealing.

Well, it's been less than a week since Trump was inaugurated into office, and already he's "cut off [financial aid] for any foreign individual or organization that even mentions abortion as a family planning option for women." He's officially ordered the construction of the U.S./Mexico border wall. He's taken strides to ban refugee entry into the country. And all of this is going down after a campaign riddled in sexual assault allegations, "grab 'em by the pussy" revelations, mockery of disabilities, and flat-out racist commentary that made it pretty clear who the "bad hombre" in this narrative really was.

So, yeah. The idea of raising a daughter (a daughter with Colombian in her) in the United States right now? Not so appealing.

There were a lot of reasons finding out I was expecting made me want to move. My partner (who is from the UK) had struggled to work in his field in the States, so I was our primary source of income. This wasn't an issue, except that I knew I'd want to take some time off post-birth. Back in England, he'd be able to pick up where he left off so that I could scale back, have the baby, and return to writing on my own timeline. This, I wanted. Our support network across the Atlantic was also far more cultivated: With family who'd be able to help with childcare and a tight-knit group of friends, I knew that loneliness wouldn't be a problem. Nor would healthcare: Because the National Health Service is still a basic right granted to citizens — which both my daughter and I would be — at no monetary cost. Also from a monetary perspective, our cost of living would be sliced in half when residing an hour outside of Manchester rather than an hour outside of Manhattan.

I know raising my daughter in America right now would jeopardize my mental health. I would fear for my rights over my body. I would fear for her's; for the lasting impact that Trump's decisions over these next four years will have on her generation.

All that said, the fear of what a Trump America might look like was at the top of the list of reasons to relocate. Part of me wondered whether I was copping out: Whether I would be of better use to my fellow women, feminine people, and queers if I stayed; if I could walk alongside them at the Women's March or rally at Planned Parenthood. I wondered whether I should be protesting the wall IRL: Coming together with my fellow Latinx individuals to remind people that history has already had a wall, and all it really did was further restrict freedom. It also ended up being torn the f*ck down 25 years ago. Why haven't we learned?

The answer I have come to is maybe. All of these things would have undeniable value, but being able to participate in such resistance would mean feeling able to do so, mentally. And I'm not quite sure I would. I know raising my daughter in America right now would jeopardize my mental health. I would fear for my rights over my body. I would fear for her's; for the lasting impact that Trump's decisions over these next four years will have on her generation.

I would cringe every time another group of men, with Trump at the helm, appeared on television or in a magazine to debate our bodies; to debate what we are and are not allowed to do with those bodies. I would fear for us both should we be heard speaking Spanish on the streets by people who don't want any more native Spanish speakers in "their" country. I would worry that she'll never feel equal. Because even if my partner and I tell her she is — even if we teach her that she is as worthy and valid and capable and inspiring as someone assigned male at birth — she might not believe it. She might not believe it because her president sure doesn't — and the myriad people he inspires (over half of the country, to be exact) don't seem to believe it, either.

Raising her in a nation where the dominant message is currently, "You can sexually assault women. You can hurt women. You can be a racist. You can think it's cool to ban an entire religion from your country. And you can still be the goddamn president," just isn't my idea of a good time.

I know there is a certain amount of privilege involved in my choice to move. Not everyone has the option. And I'm certainly not suggesting everyone should migrate to Canada or that anyone raising their children in Trump's America is a bad parent. Not at all. I'm also not suggesting that England is perfect. It has Theresa May and Brexit to contend with, after all, even though observable prejudicial acts day-to-day seem more few and far between here. At least in my experiences.

But I know that when it comes to me, I cannot do right by daughter if I don't feel safe. And with every passing day that inched us closer to Nov. 8, 2016, I felt less secure. I felt like my heritage, my gender, my sexuality were all under attack.

As I read the statistics for rising hate crimes across the U.S. in 2016, I do not believe those concerns were invalid. According to the New York Times, "In November, [the F.B.I.] reported a total of 5,850 hate crimes in 2015, up from 5,479 in 2014. The biggest jump was in anti-Muslim hate crimes, which rose by 67 percent last year. Anti-Semitic crimes were up nine percent, and anti-black crimes rose almost eight percent." Though F.B.I. data for 2016 is not yet available, Forbes reported that a study by the Southern Poverty Law Center revealed 867 incidents of harassment and intimidation (hate crimes, specifically) went down between Nov. 9 and Nov. 18, 2016, with 202 occurring on the day after the election alone.

It is subsequently not overreaching to assume that, at some point, my daughter might be at risk of the same: A target for having been born a girl with a Colombian mom and two parents who don't identify as hetero.

So for now, I will fight from my computer. I will continue to write stories, post social media statuses, and share articles and research that tackle the state of the country I used to call home right now. I will attend the marches and the rallies held in Britain in solidarity with the women's movement and the Black Lives Matter movement in America. I will call out hate when and where I see it.

I will do so from a place where I don't worry about my kid quite as much. Where her healthcare is currently not at risk. Where a woman (even a questionable AF woman) can be prime minister. Where a wall isn't going to be built to separate people with heritages close to her own. Where speaking her second language won't place a target on her back. Where she can hopefully learn her worth and strength and the simple fact that her body and choices are her own.