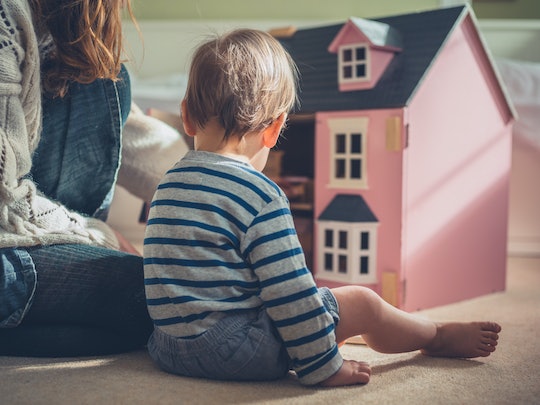 As any parent can tell you, raising kids is a challenge regardless of their sex. While there are plenty of books out there that can prepare you, in the end you have to use your best judgment and, in a sense, learn as you go. And no matter how ready you feel, you'll inevitable face multiple surprises along your mom journey. Still, it doesn't hurt to prep for your future as a parent, so I asked some moms to share the most unexpected aspect about raising boys. Turns out, they had a lot to say.

I’m raising a son myself. Well, I’m raising a child who was assigned male at birth. Gender is a social construct so I am well aware that, one day, my son might tell his father and I that we got it wrong and he identifies as a woman. But, for now, our son is our son until he tells us otherwise. And because I approached motherhood knowing that gender stereotypes are, for the most part, BS, I have done what I can to ensure my son gets to make his own choices about things that are often gendered, like what clothing he wears or what toys he plays with or what books he reads. I never say no if he wants something that’s “technically for girls.”

So my biggest surprise has been that, despite my best efforts, my son is still learning some problematic gender stereotypes. He once tried to tell me that certain toys weren’t for girls, and I had to explain that toys are for all children. I also showed him a video of kids talking to a drag queen and had to explain to him that just because the person was wearing a dress didn’t automatically mean they were a girl, that boys can wear dresses too, and that there are people of other genders, too. I also know my experience as a mom to a boy isn't universal, so here's what surprised other moms who are raising sons: