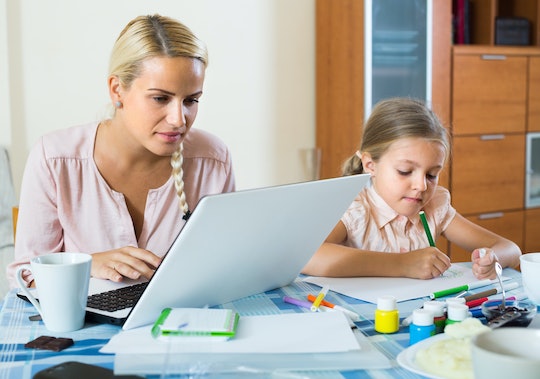 13 Things Every Mom Can Put On Her Resume

I've created my fair share of resumes (as a freelance writer for over three years, it became part of the monthly gig) and I take a great amount of pride as to what I can put on that resume. Graduated from college? Check. Understands how to create a spreadsheet even though spreadsheets are the worst? You bet. Fluent in Spanish. Si, jefe. However, the things every mom can put on her resume, in my opinion, make parents the must-have employees of any office or subsequent work environment. Sure, I thought I was an employer's dream candidate before I procreated, but now? Now I know what I'm worth (and it's certainly more than the 80 cents for every dollar a man earns, thank you very much).

The fact that my life would change after I became a mother wasn't lost on me, but I didn't necessarily realize that those changes would only make me a more desirable employee. In fact, I guess I tended to only focus on the "negative" aspects of how my life would be fundamentally different once my son came into the world. No more going out whenever I wanted, for as long as I wanted. No more lazy Saturday and Sunday mornings. No more random, spontaneous trips to distant lands (OK, I didn't really go to "distant lands" before I was a mom, but I think Las Vegas is strange enough to count). I was so afraid that I wouldn't recognize who I was after I became a mom, that I failed to realize how much motherhood would enrich my life. In other words, my son has made me better and in more ways than I can possibly articulate. Hence, the bullet points and the resume-like organization of all the wonderful attributes my son has given me.

So, if you're a mom and you're either preparing to go back to work, or you're thinking of re-joining the work force after a significant absence, find solace in the fact that motherhood has gifted you with a boatload of admirable qualities. You're a potential boss' wet dream, my friend. Just make sure you write your resume accordingly.

More Like This
Stepmom Quotes & Sayings For Every Occasion
17 Best Potty Training Products For Toddlers
From Captions To Gifts, These Are All The Kindergarten Graduation Ideas You Need
Here’s What You Need To Know About That Viral 1960s Baby Formula “Recipe”