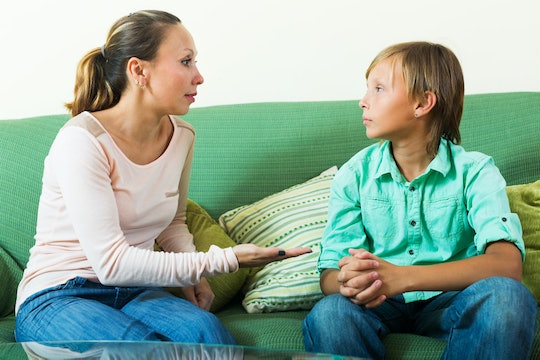 Turn on the news and you’ll no doubt hear or read something related to sexual assault or abuse. Between the advent of various anti-rape hashtags and the more recent congressional hearings revolving around Dr. Christine Blasey Ford and now-Supreme Court Judge Brett Kavanaugh, these harrowing accounts and stories have been impossible to ignore. As a result, moms are sharing the stories of their sexual assaults with their children (or, at the very least, laying the groundwork to do so). At a time when the political discourse can be triggering for sexual assault survivors and confusing for children, mothers who've experienced systemic sexual abuse first-hand are choosing to steer the conversation in a productive direction at home.

(Trigger warning: this post contains descriptions of an alleged incident of sexual assault that some readers may find troubling.)

My son is in preschool and, as a result, is far too young to know what sex, rape, assault, or systemic gender-based violence is. But I know that won't always be the case, which is why it's so important to me to instill in him a strong understanding of consent at a very early age. I want him to learn how to speak up for himself and others, especially if he continues to identify as a cisgender man and, as such, has an amount of privilege that women, trans, and non-binary individuals do not.

I'm not quiet about my experiences, though, and especially on the internet. I’ve written about my date rape, and about the time a cab driver assaulted me, and about the harassment I’ve endured since I was in elementary school. And one day my son will be old enough to understand the complexities of assault, and at that point we will have one of several important talks that will, no doubt, include my personal experiences. Because, in the end, I want my son to know how insidious sexual violence is, and how gender-based violence is about power and never about love and intimacy.

As parents, how we choose to discuss these topics with our children is entirely up to us, and what we decide to share about our own pasts is a personal decision that only we can make. But across the country mothers are making the decision to disclose their own sexual assaults to their kids, in age appropriate ways, so their children better understand what so many individuals face on a daily basis. So with that in mind, here's how a few moms are deciding to use their past trauma to help shape their children's futures:

More Like This
Mom On TikTok Asks Daughters Why They Want To Be Boys & Same, Girls, Same
When Does A Baby Recognize Their Father? A Pediatrician Explains
What To Do If Your Toddler Keeps Taking Off Their Diaper At Night
Marie Kondo Gives Up Tidying Post-Kids, Sparking Joy For Moms Everywhere
What Parents Are Talking About — Delivered Straight To Your Inbox