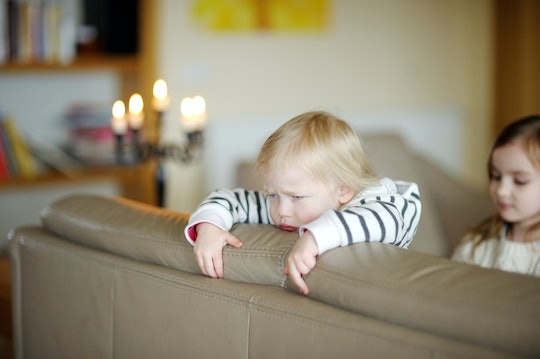 My Nasty Breakups Prepared Me For Toddler Tantrums

I have to assume I'm not alone in believing there's nothing particularly enjoyable about a breakup. Even the most amicable of splits are taxing, difficult, and somewhat confusing. Since I was once notoriously horrible at dating and have a slew of unsuccessful relationships now behind me, I have to say that I know my way around a crappy breakup. However, I can say that my nasty breakups prepared me for my kid's toddler tantrums, so they weren't entirely pointless. I mean, not only were they the catalyst for me eventually finding my partner and the father of my son, they prepared me for the annoying, difficult, and sane-testing moments that come along with a toddler acting ridiculous for no reason whatsoever.

In all fairness, my exes are not solely responsible for these breakups being pretty damn horrible. There's always two sides to every story and I was not particularly "easy to deal with" in my more formidable, college and post-college years. However, in the middle of all that self-awareness I can still say that the crappy breakups happened for a reason: the person I was with wasn't someone I ever should have ever been with. Trying to make a relationship work — pushing toward a future that doesn't really exists and holding onto someone who doesn't really want you in return — is never a recipe for an amicable split. So, when it comes to breakups, I have had more than my fair share of toxic, hurtful, and downright disgusting ones. From slammed doors to horrible words being thrown around in all directions, to pictures breaking and threats being made: it wasn't pretty, my friends. Not in the slightest.

Still, like almost any good, bad, or ugly moment in my life, I learned from them. I took those breakups (and sometimes the long arguments that followed) and turned them into silver linings. Now, when my kid throws his tiny little body on the ground and refuses to move because his show isn't on (not my fault, child, that's the cable provider's fault) I know I can handle it. My kid has nothing on some of the adult toddlers I used to date, so a 2-year-old tantrum is child's play, kids.