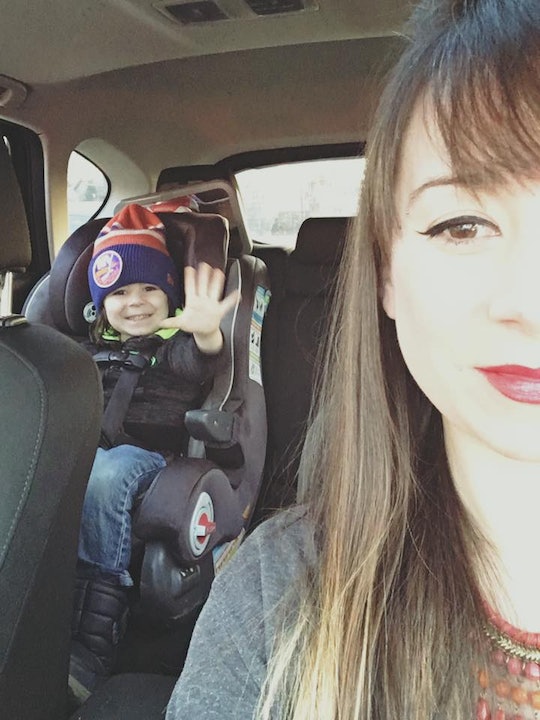 Honestly, I Don't Believe I Was Made To Be A Mother

It's a sentiment I see often, especially when I'm perusing Facebook at some ungodly hour after my 3-year-old "I still like to sneak into bed with mom at 2:00 a.m. so I can kick her in the ribs" son wakes me up. Post after post I see moms of all ages, some I know well and some mere acquaintances, proudly proclaiming that they were, without a doubt, made for motherhood. That's not a statement I can personally agree with, though. In fact, I don't believe I was made to be a mother at all.

Of course, that's not to say that I think less of the women who feel like they were destined to give birth and raise children. I am not, and never will be, in a position to judge how someone feels about their life, motherhood, or what they were or were not "meant to do." And I have certainly felt those all-encompassing feelings that often accompany parenthood. There are moments, many moments, when I look at my son and can't help but feel like we were cosmically designed for one another; that during some other-worldly poker game, the universe dealt me an incredible hand of cards and I cleaned house.

There are also times when I look at what has transpired in my life and can't help but think that even the worst of times helped me prepare for certain parenting moments that I'd otherwise be ill-equipped to handle. When I found out I was pregnant with twins and, 19 weeks later, was told the doctor could no longer find a heartbeat for Twin B, I relied on the knowledge that I had survived other emotionally difficult, heartbreaking, and painful situations before... sometimes as a young child. When I was in and out of the hospital for numerous pregnancy complications and pre-term labor scares, I remembered that I overcame seven knee surgeries in just two years. A week in the hospital for a blood infection? Eh, it was nothing.

In other words, I get it. When you feel so connected to another human being that you can't help but feel compelled to swear it was all predetermined — that you were designed for parenthood and everything it throws at you — why not let the world know? Celebrating that type of intrinsic bond with another human being is a beautiful thing, and one all parents should feel comfortable expressing.

But I think claiming I was "made" for parenthood diminishes the incredible choice I made to become a mom in the first place. I had agency over my body, and my future, and I don't want to diminish my decision to become a parent — a decision I believe to be incredible and daunting and personal and powerful and terrifying as hell. So to say I was "made" to be a mom is to say that I had no say in the trajectory of my life or how I live it. And, well, that's just not true. I had a say, and at the end of the day I chose to sacrifice sleep, my bodily autonomy, lazy Saturdays, child-free dinners, going to an actual movie theater for over a year, and a slew of other things in order to be the parent I wanted to be.

I don't always know what I'm doing, and parenthood has been nothing if not a series of lessons that have forced me to grow and evolve as a human being.

To me, motherhood is at its most beautiful when it remains a choice — one entered into freely and emphatically and without coercion. And while I don't believe it's the intention of most women who believe they were made to be moms, that sentiment is often used to curtail reproductive rights and control what women do with their bodies and, subsequently, their lives. From politicians calling pregnant women "hosts," to the current president proudly claiming that he has taken no part in raising his children, to Pope Francis saying, "The choice not to have children is selfish. Life rejuvenates and acquires energy when it multiplies: It is enriched, not impoverished," the idea that all women are "made to have children" is not only factually incorrect, but paves the way for dangerous political policies that restrict the legal right to emergency contraception, birth control, and abortion services. I don't believe we can claim motherhood to be a beautiful thing if we also make it a consequence of sex, or a life choice we force women to make by taking away their access to reproductive health care.

I also believe I am more than my ability to reproduce, and claiming that I am simply "made" to be a mom diminishes everything else I was "made" to do, too. If my body was designed to have children, it was also designed to be a writer, to snowboard, to be an editor, to play basketball, to bungee jump off bridges, to advocate for others, and to memorize almost every line in the awe-inspiring nine seasons of the critically acclaimed and always relevant television show, The Office. Yet rarely, if ever, are women told they were "made" to become CEOs, writers, advocates, business owners, travelers of the world, athletes, or, well, anything else. No, more often than not motherhood is what we're constantly told we're "made" for, and that notions is frequently used to shame, judge, and diminish other women for the choices they make about their own lives... especially if those choices don't involve children.

I wasn't powerless over my life. I was the force driving it forward.

Plus, if I was "made to be a mom" I feel like I would have a better handle on the whole parenting thing. Spoiler alert: I don't. I don't always know what I'm doing, and parenthood has been nothing if not a series of lessons that have forced me to grow and evolve as a human being. I didn't feel like I knew what I was doing right away as a new parent, and now that my son is about to turn 4 and as I prepare for the birth of my second child there are still moments when I feel like a clue-less first-time mom. My choice to become a mom gave me the opportunity to learn more about who I am as a person, a partner, a woman, and a caregiver. I wasn't tapping into some innate knowledge gifted to me; I was cultivating that knowledge on my own and as I made my way through pregnancy, labor, delivery, and postpartum life.

So, no. I don't believe I was made to be a mom. I believe I chose to be a mom. I wasn't powerless over my life. I was the force driving it forward. I looked at who I was, what I wanted, who I had become, and who I wanted to be, and made the decision to become another human's mom. And, honestly, it was one of the best decisions I have ever made.