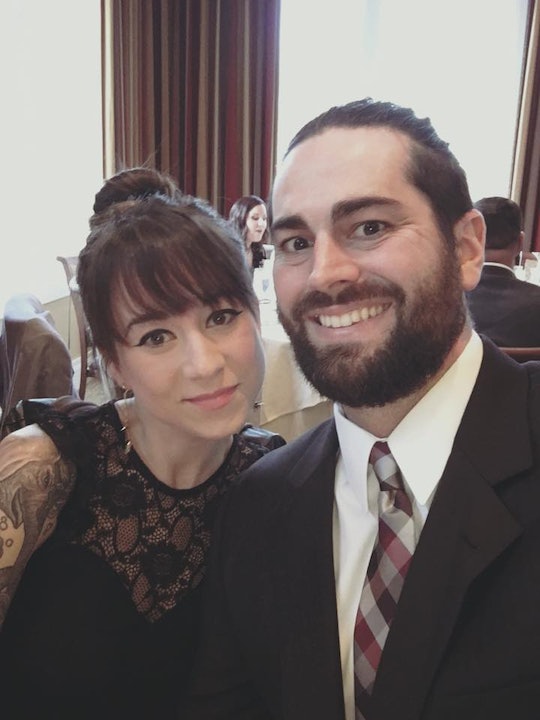 I'm not above admitting that when I found out I was pregnant I was terrified. I knew I was ready to be a mom, sure, and my partner and I were excited to be parents, no question about it. But I loved the life we had — just us two — and wasn't naive to the fact that parenthood changes relationships. I was terrified we wouldn't prioritize our love or commitment to one another, and, as a result, fail as a couple. Turns out, we didn't go on a date for the first year of our baby's life... but it actually made our relationship stronger. My fear was warranted, to be sure, but it didn't necessarily mean my romantic relationship was doomed to fail.

You receive a lol of unsolicited advice as a soon-to-be parent, and my experience was no different. From how I should bring my newborn into the world to how I should feed them to how I should "keep the spark alive" in my romantic relationship with my parenting partner, there was no end to the number of people who felt compelled to share their learned wisdom (and, sometimes, Google searches). And since my partner and I weren't married — and still aren't, after more than five years together — most people seemed to focus on how we were going to "stay together for our future child."

While advising anyone to stay in a romantic relationship simply for the sake of their children, especially if that relationship is toxic or abusive, is problematic at best and potentially dangerous at worst, I did understand where many concerned individuals were coming from. After all, more than 30 years of studies, according to Fortune, has proven that "the relationship between spouses suffers once kids come along." In fact, according to The Washington Post, "Researchers found that the rate of the decline in relationship satisfaction is nearly twice as steep for couples who have children than for childless couples."

So the consideration others gave my relationship wasn't necessarily unfounded, even if it was inappropriate and entirely none of their business. And, initially, my relationship did take a hit once my son arrived. Between the sleep deprivation, the breastfeeding struggles, postpartum depression, healing from childbirth and my aversion to sex, and simply trying to adjust to a new life that involved another tiny, needy human being, my partner felt less like a lover and more like a roommate who happened to know infant CPR.

We redefined what we considered to be "romantic," and in a way that was conducive to our new life as exhausted parents.

My partner and I also lived in a small one bedroom apartment, far from any family or friends with children. Essentially, we were on our own. We couldn't call an excited grandma or a seasoned parent to take over while we caught a break, and we didn't have the financial ability to hire a nanny or even a once-in-a-while babysitter. My partner didn't have any time off work (aside for the two weeks he took immediately after our son was born) and I was a freelance writer working from home, trying to supplement our income while we saved on childcare costs. In other words, in order for us to continue to care for our child and pay our bills, we couldn't afford to have a date night — apparently a cardinal sin in the parenting world.

Over time, however, I started to realize that our inability to "take a break" strengthened our relationship. We had to find a way to work as a team, even when we were frustrated or at each other's proverbial throats. We had no other option, so the only available avenue was to lean in, learn to communicate under the most stressful of situations, and consider one another to be the life raft in an unforgiving sea of late night feedings, diapers, and unread baby books.

We redefined what we considered to be "romantic," and in a way that was conducive to our new life as exhausted parents. Sitting on the couch and reading our newborn a book he couldn't possibly understand was now romance incarnate. Falling asleep in our bed, all three of us, as we caught up on the news was now once-in-a-lifetime evening. My partner wiping spit-up off my shirt, or feeding me while I breastfeed our son, or telling me to sleep in while he took the baby, was the stuff of romantic comedies.

We found a way to focus on one another and tend to our newborn. We figured out how to communicate despite the constant cries of a hungry infant.

More importantly, we were forced to see a side of one another that is often considered "unattractive." Any lingering facades we stubbornly held onto as child-free individuals vanished, and we were left with the raw, unfiltered versions of one another. I knew exactly how my partner smelled after not showering for three days. My partner knew exactly how I looked after three days of zero sleep. We both knew how one another argued after enduring an hour (or two) of listening to a screaming baby.

And here's the thing: I loved he way my partner smelled after not being able to shower; his sweat and fading cologne mixing with what can only be described as determination and an unapologetic love for his family. Would I have rather him showered? Yes, but I can appreciate his dad stink, too.

Did we argue in that first year of parenthood, and as a result of our world being (for the most part) three people big? Of course. But after taking the time to go to our respective corners in our tiny apartment, and learning how to fight fair, we were made better for it. We found a way to focus on one another and tend to our newborn. We figured out how to communicate despite the constant cries of a hungry infant. We found our way through the fog of sleep deprivation to make sure that we were always on one another's side, and that sense of "us against the world" only fortified our relationship.

So are date nights important? Of course. But if you can't get away to enjoy a romantic, child-free evening, there's no reason to stress, either. Your relationship will change, but that can't mean it won't change for the better. After all, mine did.