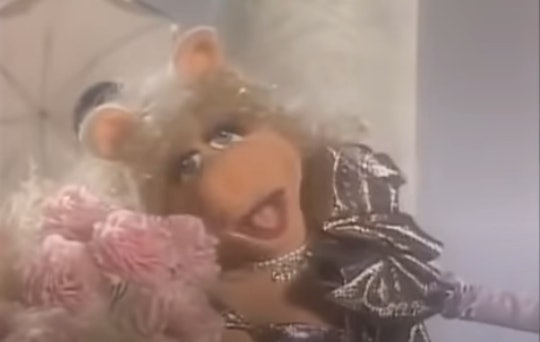 How To Watch 'A Muppet Family Christmas' This Holiday Season

It's the crossover special of your dreams.

Some holiday specials are seriously under-appreciated. Everyone is all about Rudolph the Red-Nosed Reindeer, and Frosty the Snowman, and How the Grinch Stole Christmas. I love each and every one of those holiday specials, too, don't get me wrong. But there's one particularly nostalgic pick from my own childhood that does not get nearly as much attention it deserves. Let me tell you how to watch A Muppet Family Christmas, because it truly has everything you could possibly want. Not the least of which is incredible style inspiration from Miss Piggy herself.

The 1987 made-for-TV special A Muppet Family Christmas never seems to have taken off in popularity as others have (even other Muppet specials, to be honest). Many families have gotten cozy on the couch to catch The Muppet Christmas Carol from 1992 featuring Michael Caine as Ebenezer Scrooge and Kermit the Frog as Bob Cratchit, which you can now stream on Disney+. But even though the special aired on TV again in 1988 and 1989, A Muppet Family Christmas just sort of disappeared after that.

Perhaps it doesn't have the same human star power as other holiday specials, but it has muppet star power in spades. A Muppet Family Christmas features the entire cast of The Muppets, like Kermit the Frog, Fozzy Bear, and Miss Piggy, alongside many cast members of Sesame Street. Which means Big Bird and Oscar the Grouch end up singing Christmas carols with Gonzo and the Swedish Chef.

Oh yes... and even the Fraggles make an appearance. A delight to every ‘80s kid on the planet. As much as the film sounds like a weird, holiday-themed fever dream, it’s remembered quite fondly by those who watched it as kids. So it makes sense that an entire generation of Muppet fans would want to share it with their own children.

'A Muppet Family Christmas' special is one of the forgotten classics.

So how does a person go about watching this 47-minute-long holiday special? Well, it is not available on Disney+, Netflix, or Amazon Prime, unfortunately, but you can watch the entire special in its entirety on YouTube for free.

Before you commit to watching it, you might want to know why it's so great beyond all of the nostalgia. The special follows the Muppet gang as they head to Fozzy's grandmother's country house for the holidays... all but Miss Piggy who is on a fashion photo shoot (of course) and will meet them there. Spoiler alert: Fozzy's grandmother didn't know they were coming. She had made plans to head to Hawaii to go surfing (naturally), so she rented the house to the Sesame Street gang and, unbeknownst to her, a few Fraggles in the basement. (Totally realistic holiday setup, am I right?)

Hilarity ensues when everyone gets snowed in: Fozzy meets a snowman comedian and Miss Piggy arrives late to the party in a dreamy Dr. Zhivago-inspired ensemble in a dog sled with a man dressed as a Canadian mountie, among other antics. There's singing and comedy and it is the best thing ever.

Don't believe me? Watch it for yourself.

This article was originally published on Dec. 4, 2020