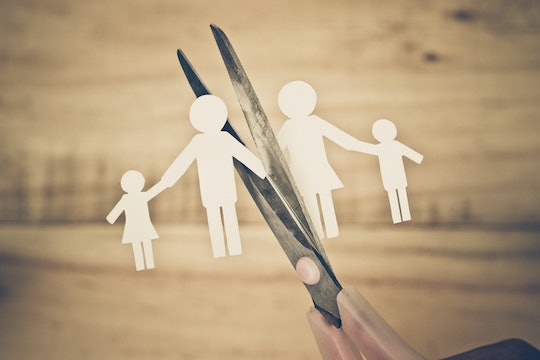 There's a pervasive myth in our culture that claims it's better for couples to stay in even the most horrible relationships "for the kids," than it would be to get a divorce. I do not subscribe to that myth, and when I asked moms to share why divorce was the best thing for their kids I was, again, reminded why it's vital that we continue, as a society, to push against that cultural fallacy.

Despite the fact that so many divorced moms have really good reasons for leaving, people say all sorts of things about them. They are selfish, broken, damaged, and undesirable. They are blamed for destroying families, when it's often the person they left who did the destroying. This has to stop. When one in three women has experienced intimate partner violence in her lifetime, according to the National Coalition Against Domestic Violence, people should be supported in leaving harmful relationships. Period.

When I left my husband, I left for a variety of reasons. I left because he hurt me, he cheated, he stole from our family, I was afraid, I was not in love with him anymore, and I felt so alone. Mostly, though, I left to give my kids a life of stability. A life without anger and violence. A life that was not possible while my ex-husband and I were together. If I could go back in time, I would tell myself to leave so much sooner. I would assure myself that everything would not only be OK, it would be amazing. Most of all, I would tell myself there are so many reasons why divorce was the best thing I would do, not only for myself, but for my kids. Our lives are so much better now. Seriously.

Even when your relationship is not abusive, it's important to recognize that it's really hard for children to thrive in an unhappy home and with parents who have an unhealthy relationship. No one benefits, children included, from an environment in which two adults fight all of the time, struggle with substance abuse, or struggle with financial instability. No one should face judgement for removing themselves and their kids from an unhappy home, and trying to create the best possible future for everyone involved.