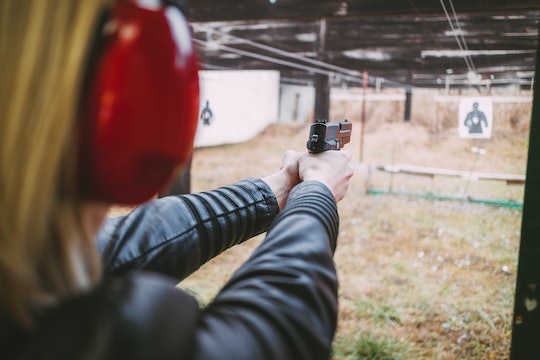 When it comes to the debate on gun control, we often hear from two opposing sides. One one side there are people who recognize the danger of increasing the number of guns sold, and have no desire to add to it. On the other side, you have folks who swear any form of gun control is an attack on the second amendment, and who flock to gun stores whenever a tragedy occurs. But how often do we hear about what gun-owning moms are doing to prevent gun tragedies? Like any other complex situation in the world, there is no "black and white" way of looking at gun control and gun violence prevention.

As a mother, as someone who came of age in the era of Columbine, and as someone who does not own a gun herself (and has no desire to), it’s extremely difficult for me to ask people who own guns what they’re doing to prevent gun tragedies. The shooting at Marjory Stoneman Douglas High School in Parkland, Florida — in which 17 students and teachers lost their lives, and another 14 were injured — is still fresh on our minds and in our hearts. Sometimes it feels like nothing can prevent this kind of atrocity from occurring, but we all know that's not the case. In fact, in other parts of the world countries have been able to enact laws that have curbed senseless gun violence and mass losses of life. There is something we, as a nation, can do.

Personally, I’m of the mindset that we definitely need stronger controls over gun ownership, including universal background checks, strict punishments for anyone whose gun somehow makes it into the hands of a child, and a ban on all assault weapons. I’m shook enough that I know I need to put more time and effort into fighting for better gun control, and fighting to dismantle a culture that loves, and is arguably obsessed, with guns.

But I know not everyone thinks like I do, or considers the aforementioned to be a solution. So I asked a group of gun-owning moms what they were doing to prevent tragedies. It was startling that no one brought up working with groups like Everytown For Gun Safety to lobby for better gun control. I was surprised that no one talked about reducing their children’s exposure to violent entertainment (especially the kind that romanticizes gun violence). Not a single person talked about electing leaders who believe in gun control legislation. None brought up pushing for the Center for Disease Control and Prevention (CDC) to be allowed to study gun violence. No one brought up bully culture, and how this often contributes to certain students committing atrocities against their fellow classmates. No one mentioned mental health.

Instead, the answers were all more or less the same. I urge parents who own guns to take a cue from the following parents, though. They lock and store their firearms, and teach gun safety consistently. In the end, the fight again gun-related violence is a fight we must all be part of.