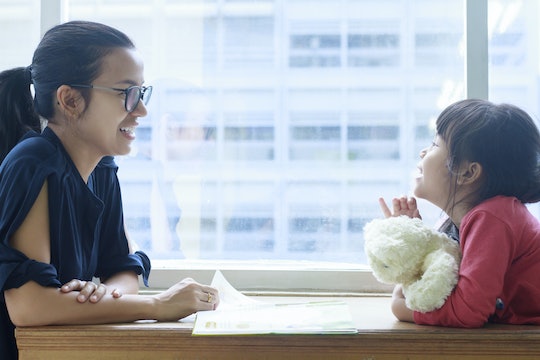 9 Moms Talk Share How They Explained Gender To Their Kids

As children, we’re frequently exposed to messages that reinforce the idea of a gender binary. For example, pink is for girls, blue is for boys, girls are emotional, and boys shouldn't cry. But many of us either know or go on to learn that these so-called "rules" are not set in stone. In fact, many of them are just wrong. But how we, as parents, choose to approach gender will inevitably influence our kids. So how exactly does a mom explain gender to her child? Is there a need to have a specific, one-time talk, or are these ongoing lessons we'll be imparting over and over and over again?

As a mother, I know it’s my responsibility to teach my son about the world around him. I also know that, right now, a number of things are already influencing him, including but certainly not limited to: school, television, books, movies, and other children. While I haven’t sat my son down to specifically discuss the gender spectrum and the various gender identities, I’m doing what I can to keep my language more gender-neutral, explain that people are simply people, and highlight the fact that there are more than two genders.

I have also been able to address instances of gender stereotyping, as it is becoming an increasingly obvious issue the older my son gets. I'd like to believe I’ve done my best to show him a variety of examples of femininity and masculinity, so he understands that gender is more of a spectrum than binary. But there’s more than one way to approach this topic with children, which is why I asked the following moms to share how they explained gender to their own kids: