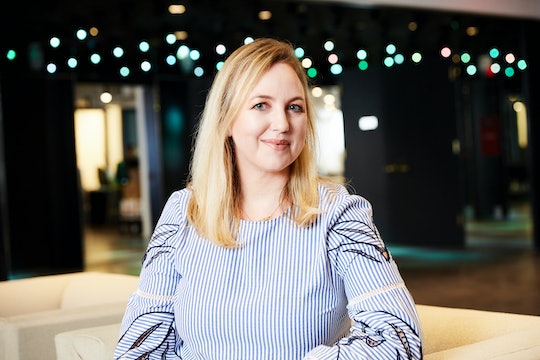 Motherhood is a lot easier if you can get some of your basic needs met. I don’t mean an uninterrupted shower — you’re not getting one of those for a while — but Romper’s third digital issue, Mom Jokes, is all about the things that are at your disposal to get you through: humor, especially the hilarity doled out by other moms; those late-night text messages with friends who get it; necessary celebrity rabbit holes; and blessedly weird children’s books that won’t make you want to stab yourself in the eye if you have to read them one. more. time.

You know — the essentials.

The cornerstone of this issue is Mom Com, Romper’s new series showcasing how wet-your-pants-and-not-just-because-you-didn’t-do-the-kegels funny women with kids are. Doing comedy after you have a baby is notoriously difficult, but we’d argue that it’s also more necessary than ever. Whether knocking out stand-up sets in New York City or killing it on Twitter, comedians don't disappear once the colostrum comes in. They get on stage at 1 a.m. and talk about how to deal with a kid who won’t stop yelling, “Mom, clouds!” on a plane, or about what is really in a single mom’s nightstand (self-help books). And they deliver brilliant takes on every conceivable subject, mom-related or otherwise, that offer a hat tip to the complexities of mom-life and make it easier for the rest of us to get through the day.

Mom Com celebrates some of our favorite funny moms with their (hilarious) perspectives on the issues we all deal with. We’ve got Jamie Aderski on your average day when you have a toddler, Emily Foster on being called the M word, Laura Benanti on discovering your daughter is literally allergic to you, Calise Hawkins on post-breastfeeding boobs, Angelina Spicer on how everyone is a liar, at least about motherhood, Bramty Juliette on those times when you *think* you're going to the bathroom alone, and The Letdown's Alison Bell on that bleak, existential event that each of us faces one day: the death of the nap.

In the interest of #journalism, we also delve into a short history of the mom-wine meme, because it’s important to understand your roots.

And in a dispatch from the comedy trenches, we ask Laurie Kilmartin, Ophira Eisenberg, Ms. Pat, and other comedians to tell us what they can and can’t say on stage as parents (boobs might get laughs; mastitis, not so much). Speaking of boobs, one funny mom shares with us the time she had to breastfeed on stage — when motherhood and work collided in front of a room of strangers clutching rum and cokes. In the interest of #journalism, we also delve into a short history of the mom-wine meme, because it’s important to understand your roots.

When it comes to surviving and finding humor in those moments of angst in the middle of the night, or the wee hours of the morning (or, oh, say, at 2, 3, 4, and 5 p.m. in the afternoon)… there’s no one more important to a mom than her friends, and, of course the internet. U Up? celebrates those life-saving mom texts, aka your lifeline to the outside world, and, more importantly, to people dealing with the same things you are. And in Dear Jenny, Romper’s advice columnist, Jenny True, who we fear only pretends to be our best friend, advises on what may be the worst moment in our parenting careers: when we realize we are jealous of another mom, and the envy is consuming our small, caffeine-sped black hearts.

Another life-saving pastime for new moms? Indulging in a little celebrity escapism, whether that means assiduously following a Kardashian’s snaps, scrolling through Chrissy Teigen’s Instagram (God bless you, Chrissy), or Googling to see what happened to some of our favorite people from back in the day. Claim To Fame is Romper’s ongoing series profiling child stars from ‘90s and ‘00s TV, looking at where they are now, and asking what they’ve learned from their claim to fame. From Mara Wilson, who has finally embraced the role of Matilda in her life to Fuller House’s Jodie Sweetin, who says the Tanners truly felt like her family when she was growing up (us, too, Jodie, us too), we can’t wait for you to get reacquainted with some of the actors who were agonizing over their AOL screen names at the same time we were.

We’re still the same people we were before we brought new humans into the world, just with way more material.

And while we have our nostalgia hats on, one of the best things about having a kid is getting to revisit your favorite children’s books. (It would just be nice if we didn’t have to revisit them quite so many times in a row.) This Book Belongs To is Romper’s ongoing series celebrating the kids’ books that take us back to our own childhoods and also aren’t painful to read on repeat. Check out Catherine Newman’s definitive weirdest kids' book of all time, Amy Bloom’s search for a children's book that doesn't feel like a chore, Jon Klassen on the impulse behind murdering someone for their hat, and Ryan T. Higgins on how Winnie-the-Pooh explains our entire existence. Just for starters.

Because all of the above will challenge your newfound inability to read for more than 10 seconds at a time, we’re also bringing you the Mom Swag edition of A La Cart, our usual shopping guide, this time focused on #funnysh*t created by moms for moms. We’re also introducing Code: ROMPER, in which we provide exclusive discount codes on stuff you like but probably don’t need so you can justify spending even more.

Becoming a mom changes everything, but, paradoxically, we’re still the same people we were before we brought new humans into the world, just with way more material. Some of our goals and motivations have changed, sure, and the closest you’re coming to that aforementioned “shower” is a dry bath with baby wipes — but that’s all more reason to keep creating and seeking out the things that do fulfill us, support us, and above all else, make us laugh.