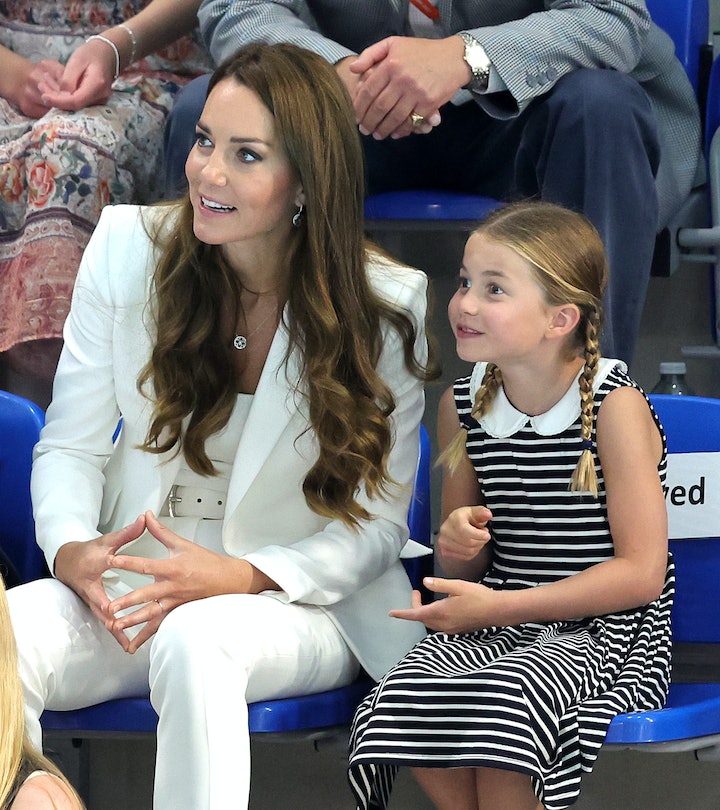 10 Ways Princess Charlotte Is Just Like Her Mom Kate Middleton

They’re two peas in a pod.

Princess Charlotte is just like her mom, Kate Middleton. Yes, a case could be made that she is also very similar to Prince William. She certainly looks a lot like his side of the family, especially if you see photos of her great-grandmother Queen Elizabeth as a child. But when it comes to her true nature, she is all about being like her mom. And it’s pretty obvious that’s just as she likes it. Here are at least 10 ways they are so alike.

When Princess Charlotte was born in 2015, royal watchers were thrilled to discover that her full name was Charlotte Elizabeth Diana. Elizabeth, presumably after Queen Elizabeth, and Diana after her late grandmother Princess Diana. While the Duke and Duchess of Cambridge were clearly honoring two very important women in their lives with her middle names, it turns out they might have been doing a bit of double-dipping. Kate’s full name is Catherine Elizabeth Middleton. So these two have been sharing a middle name all this time right under our noses. Handy coincidence or a chance for Kate to share a name with her daughter? You decide.

As a seasoned senior royal and a future queen consort herself, Kate perfected her own curtsy long ago. And now that Princess Charlotte is attending royal functions like the Platinum Jubilee and Christmas services at Sandringham, the world has gotten a glimpse of her own curtsy. It looks just like her mom’s, to be honest.

Princess Charlotte has joined her mom in the kitchen several times to bake for royal fans, and they seem to have a blast while they do it. Kate has always loved to include her kids in the cooking process, even if it means they’re going to be getting “messy” in the process.

When Kate created her “Back To Nature” garden oasis for the Chelsea Flower Show in 2019, Princess Charlotte, Prince George, and Prince Louis were her biggest fans. Princess Charlotte, in particular, seems to have taken after her mom with her happiness being out in the fresh air and smelling the flowers, and you can just picture these two out for hikes together for years to come.

#5. Two photographers in the family.

The Duchess of Cambridge has been the official family photographer for some time now, and she’s so good at it that other members of the royal family, like Camilla Parker-Bowles, have asked her to photograph them as well. Now if the next generation of the royal family is looking for a photographer, perhaps they’ll ask Princess Charlotte. She apparently loves to take photos as well and even received a child’s video camera for Christmas last year. Royal documentarian?

#6. They twirl their ponytail the same.

Kate tends to fuss with her incredible mane of hair pretty often, and it’s a habit her daughter has picked up. A video of Princess Charlotte twirling her ponytail exactly like her mom on her first day of school at Thomas’s Battersea in London in 2019 proved that she is her perfect mimic.

Princess Charlotte takes after her sporty mom for sure. She’s a soccer player, as her dad Prince William told the women’s soccer team the Lionesses, while her mom played field hockey in school.

#8. They’re suckers for a cheeky sense of humor.

Neither Princess Charlotte nor Kate seems able to resist a cheeky sense of humor. Especially if Prince William is the one cracking jokes. He seems to be able to make both his wife and daughter laugh with his goofy dad jokes, and it works for all of them.

Kate models perfect behavior when out and about as a royal. She has had years of experience, of course, but her daughter Princess Charlotte seems to come by it naturally. At the Platinum Jubilee, Princess Charlotte was the picture of a perfect little royal, even chastising her brothers when she thought they weren’t following the rules.

Some of the sweetest photos of Prince Louis in his early days were with Princess Charlotte. She clearly adored having a baby around, and was so much like her mom. Kate famously tends to get very “broody” around babies, always happy to give a little one a cuddle.

They’re two peas in a pod, Princess Charlotte and Kate.